Christmas was truly special in Alaska 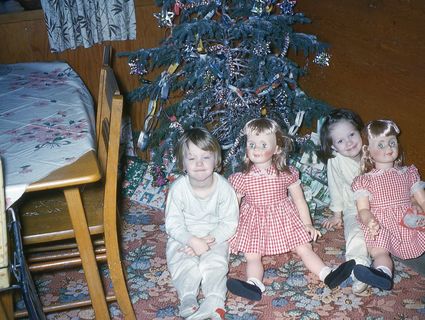 Christmas 1959 - Jeanette and Maraley Clayton with dolls from Granny.

As a child in Anchorage, Seward and then Glennallen, I remember many magical Christmases. Then, in third grade, I got into a big argument with another student about Santa. I was devastated after a conversation with my mother as I realized that the other child was right. Christmas was still special, but not magical.

During the early years, our family would frequently spend Christmas at our cabin on Kenai Lake. Dad and Mom packed everything we needed into the 1956 two-tone green Chevy station wagon and off we would go. I was the oldest child but young enough to not be much help getting things ready. Once we arrived, the trail in the deep snow from Quartz Creek Road to the cabin, the wood stove heat, and the gas lanterns all added to the wonder. One Christmas morning, we awoke to find two 36-inch dolls sitting by the tree. Our granny from New York had sent them through the mail. Mine is presently standing in the corner of my bedroom.

Christmas 1962 I woke my sisters up and we went out into the living room to see if Santa had come. Sure enough he had, but when we went in to tell Mom and Dad, they said we had to go back to bed for a while. Later that morning, each of us three girls opened beautiful sewing baskets. Mine was blue and the other two were red and green. Forty years ago, I was tempted to throw mine out and buy a new one, but it still holds some of my sewing supplies and has turned into a beloved treasure.

After we moved to Glennallen, many Christmases we had to wait until Dad got home from work at 3 p.m. to open gifts and have dinner. Power plant operators don't put up a closed sign and go home for the holiday. Since we had no relatives in Alaska, we did not have the dilemma of, "Whose house do we spend Christmas at this year?" Nor did we have company over for Christmas dinner. I guess Dad and Mom felt that our family of six was enough. In later years, my children shared Christmas morning with grandparents on either side of the family. While I grew up with no cousins, my children had numerous cousins living in the same state.

Our family tradition was to put the tree up and decorate it Christmas Eve. When we were old enough, Dad would take us kids out into the woods around our place in Glennallen and we would help choose the best tree. It didn't take long though, because the temperature was usually way below zero.

The opening of gifts when I was growing up was actually a very orderly event. The stockings always came first. We each took a turn and went around in a circle. With six people and many gifts, that could take quite a while. Sometimes Dad would turn the reel-to-reel tape recorder on behind the couch without us knowing that our Christmas celebration was being recorded. This was all very different from what my husband grew up with, so some modifications and compromises were made when our children came along.

I was about 10 years old when I became aware of what Mom called the "Christmas Letter". It was quite a big production. She would write it out and mail or take it to Anchorage to be typed and copied. Then she and Dad would sit down for hours at a time and address envelopes and write notes and get them ready to mail out. I liked to put on the stamps. Although they were sent to family and friends, I had no clue who most of the people were. They were just familiar names to me, but important people to Dad and Mom.

After we lived in the trailer for a few years, Dad bought what we came to call the "Quick Log." It had been the original office for Copper Valley Electric, built from a log kit.

One room became storage and housed the clothes dryer. The other room became our "formal" living room. Since a fire had to be lit in the wood stove prior to use in the winter, we only used it on special occasions. This room is where we put up the Christmas tree. One year when I was in high school, with Dad and Mom working and everyone busy with their own activities, the Christmas tree sat there even at 40 below looking pretty but out of sight – until April.

Many years, we kids would get at least one extra day of Christmas vacation from school. Either the day right before break started or the day we were supposed to return to school, the temperature would reach the "magic" –50 mark when schools closed because it was too cold. More time for another family tradition of jigsaw puzzles.

The first person my family ever shared Christmas dinner with was my husband-to-be. He came bearing gifts for all, but I only had eyes for the beautiful hand-made hope chest he made for me.

A year later, we had agreed to not waste money on an engagement ring but instead purchase a more practical item (sewing machine). Then Christmas Eve on our way to the evening church service, he stopped the truck and handed me a small box ― which held a diamond ring. What an unforgettable Christmas memory.