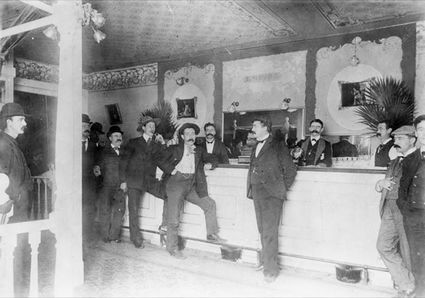 Prospectors wait at Dawson's Savoy Bar for dancehall girls to come their way.

During the Klondike Gold Rush, Dawson's dancehall girls offered prospectors a welcome diversion from their grueling, lonely days of digging in the sub-arctic tundra.

"The sourdoughs lay on their bunks until noon – and noon might just as well be any other time – moving painfully about only to stoke the stove or break off a chunk of rye bread, more from sheer boredom than hunger," wrote Ellis Lucia about digging for gold during a winter in the north country in "Klondike Kate: The Life of the Queen of the Klondike."

"Many were ill with dysentery and scurvy, and worst of all, the sickening depression of futility. At times the men entered into the awful bleakness to claw at the frozen ground of their claims. They returned to the drafty warmth of their cabins, holding stiffened fingers above the stove, to ask themselves aloud just why they were trapped here in this Godforsaken wilderness....

"Half-crazed with cabin fever, the sourdoughs could stand it no longer. Climbing into bulky mackinaws, mukluks and fur caps, they stuffed fat buckskin pokes into their coats and headed for Dawson City.... It was a gay, frolicsome world, filled with fun in contrast with the awful silence of the outer wilderness....

"Thousands in yellow gold changed hands in the gambling halls, to be lost and won again, and then to be lost once more to a pretty bit of fluff who called you honey, gave you a nice smile and a peck on the cheek, and would be your very own for the evening if you kept the champagne flowing her way. But you didn't mind, for there was plenty more of this yellow stuff where that came from," Lucia wrote.

The technique used by most dancehall girls to separate the gold miners from their wealth included getting the prospectors drunk in private boxes that surrounded dance floors in saloons. In her book "Good Time Girls," Lael Morgan shares a detailed account of the separation process written by La Belle Brooks-Vincent:

"She is all nerve as she enters a room and surveys the waiting crowd.... The dancehall girl is industrious. She is never vacillating or undecided; she is persevering. She does not flit about the room bestowing a smile here, a caress there and again a pouting neglect. When she selects her victim she stays with him. The more marked her favor, the greater his triumph.... He needs her to complete a spectacle of himself as a favored beau...."

Most of the "victims" were willing single men who prospected alone and didn't have women waiting for them back home. And they enjoyed the company of the dancehall girls, many of whom eventually ended up as wealthy as some of the miners themselves.

"The poor ginks just gotta spend it," said Diamond Tooth Gertie Lovejoy, one of Dawson's most famous dancehall girls. "They're scared they'll die before they get it out of the ground."