Stop over in a very cool country

Iceland will be familiar to Alaskans in many ways 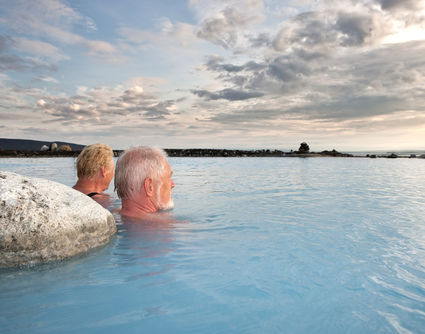 Ease your travel-weary bones in any number of Iceland's thermal pools.

If you're a "Game of Thrones" fan, Iceland calls to you.

While you can do a self-guided tour of film locations, those all-too-familiar-to-Alaskans Gray Line buses will also take you there.

Season two shifted to Iceland, and you will tour Gullfoss waterfall and the Bloody Gate at Pingvellir National Park, a UNESCO World Heritage site, where the Althing, the ages-old Icelandic parliament was seated.

Iceland Air (www.icelandair.com) offers a reasonable round-ticket for two that takes you from Anchorage to Amsterdam, with a stop in Seattle, and a multiple-night stopover for two in Reykjavík for $1,800, with hotel stays an extra cost.

Like most of Europe within range of discovery by the Vikings, Iceland was inhabited beginning in the ninth century and was settled mainly by Norwegians fleeing conflict or seeking new land to farm. By 930, the chieftains established a form of governance, the Althing, one of the world's oldest parliaments.

In 1874, Denmark granted Iceland a constitution and home rule. In 1903, a minister for Icelandic affairs in Reykjavík became responsible to the governing body.

A member of the European Union, its currency is the euro, and its population of 360,390 live on 39,769 square miles with its largest city being the capital of Reykjavík.

Want to try your hand? Sea anglers can take tours from the Old Harbor, and there are also fishing rod rentals on the pier for those who have suspect sea legs. Some of the nearby fish restaurants are happy to cook up your catch for you.

Other tours leave from Reykjavík Harbor, some year-round. The favorite choice is whale-watching, with ships cruising into Faxaflói Bay, to view harbor porpoises and white-beaked dolphins, an occasional minke whale that forgot to migrate, and humpback whales. There is also the chance to see the endangered blue whale, and fin, sei and beaked whales. There's orcas too.

Puffin watching tours are available in the summer and travel to the isles of Lundy and Akurey, just offshore, where they nest in the thousands.

In the winter, there are northern light cruises - something that most Alaskans don't get to see from a boat.

The landscape is awesome

There are volcanoes, geysers, hot springs and lava fields, and massive glaciers at Vatnajökull and Snæfellsjökull National Parks.

Soaking in a thermal pool is a big plus for those traveling the 14 hours from Alaska to Iceland; a soak in one of the many natural hot pools is a plus.

In fact, Reykjavík even has a thermal beach with white sand and warm ocean water. Most are outside, but there are some inside.

The most popular is the Blue Lagoon in a lava field southwest of the capital.

For $56 you get entrance to the pool, a silica mud mask, a towel and one free drink. It is 50 minutes from Reykjavík by car or bus.

The water temperature is 102F. Yes, you have to wear a bathing suit.

If you want to get out and explore the land, consider a ride on an Icelandic horse.

With shaggy manes and a squat muscular build and at times pony-sized, Icelandic horses are long-lived and hardy. I knew a guy in the Yukon who used them to haul wood for his lumber business because they withstand harsh winters.

Brought in by Norse settlers in the 9th and 10th centuries, they were at one time the nation's top tourist attraction.

The website http://www.extremeiceland.is offers a selection of horse riding tours that run from one to seven hours as well combination tours with river rafting, snorkeling, and northern lights viewing that run in price from $60 to $150.

Afterward, perhaps a session in a thermal pool!

A sense of culture and history

Head to the Reykjavík City Hall and buy a City Card for discounts or free entry to nearby museums. It also works with restaurants and for free city bus rides and entry to the city's swimming pools - also geothermal and open all year, where you have to strip naked and wash with soap before going in because the chlorine level is low. You'll also be padding around barefoot over ice and snow, but you're an Alaskan and can take it in stride. 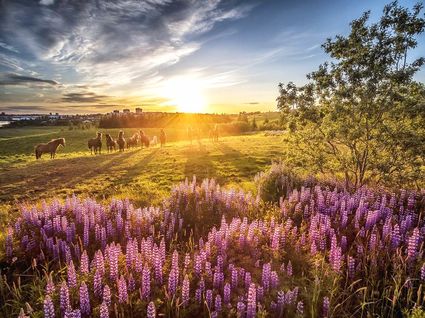 The Icelandic horse was developed in Iceland and although sometimes pony-sized, they are hardy workers.

Head to the Saga Museum, a small museum that recreates historical moments in Icelandic history and gives a compelling view into how Icelanders have lived for more than a span of a thousand years and dealt with volcanic eruptions, earthquakes, avalanches and the Black Death that wiped out more than a third of the population.

Here it's explained how Icelanders became Christians after worshipping old Norse gods like Thor, Odin, Loki and Freya. But in 1000AD, Norway threatened to invade because while Norway had converted to Christianity Iceland had not. The parliament had the Asatru priest make the decision and he sat for 24 hours under a birch tree and decided that for the good of the country, it should convert. He then threw all the idols he owned into the Godafoss waterfall.