Rides with Patches had their bumps 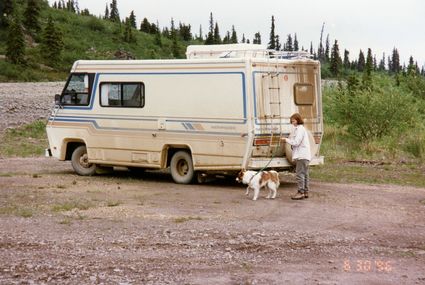 Patches and Maraley with the motorhome in June, 1996.

"This is not working, I can't handle this all the way to Texas! As soon as we get to Kamloops, I'm going to find a veterinarian and see if we can get something to quiet her down," my husband Gary declared one January day in 2000. He had already grumbled so much, I had moved into the middle of the seat of our '97 pickup. That put Patches, our dog, by the passenger window.

We didn't know about harnesses attachable to seatbelts, but we did know that traveling with Patches from Slana to Texas would be a challenge.

Two years earlier on a summer trip in our motorhome from Palmer to Dawson City, we found she "drove" every inch of the road herself. She had to be where she could see out. Anxious and panting, she watched the scenery go by, always ducking when we went through a steel frame bridge. Upon meeting an oncoming vehicle, she'd bark and follow it with her head if not her body. In the motorhome she had plenty of space to do her thing between the two-bucket seats, but she was exhausted at the end of a 500-mile day.

This trip was different. She continually circled to follow the passing vehicles, and before I moved her to the passenger side, her tail sometimes swished Gary in the face while he was driving. He was fed up.

We've had several dogs in our past life together and they all traveled well, so this dog was a surprise. The first signs of a problem came on a trip to the vet for her first puppy shots. She spent the 15 minutes it took to get to the vet barking at every oncoming car and throwing herself at the driver's side window as the vehicles passed, jumping over seats in the process. We were living in Palmer at the time and with all the traffic on the Palmer/Wasilla highway, she worked herself into a tizzy. Harsh words from me had absolutely no effect.

After that frantic ride and waiting in the lobby with strange animals and people, she was so frightened she acted like she might bite the vet. The vet recommended a puppy playgroup to help her become more sociable. Trips to the playgroup only encouraged her bizarre travel behavior. I soon purchased a metal dog divider frame to keep her corralled in the back of the car and then just ignored all the noise, quite relieved when playgroup therapy ended.

During this time I had also done research and talked with enough people to understand some of Patches' behavior. Her mother was a pedigreed Australian Border Collie and although her father was unknown, she looked pure border collie with liver colored spots instead of black. Her actions in the car were her attempt to "herd" the vehicles.

To her credit, as she matured Patches always came when called, didn't need a lot of pampering, and grew a warm enough fur coat to sleep outside even in the depth of winter. She ate just the amount of dry dog food she needed, leaving the rest for another meal. She barked only when visitors came into our driveway, didn't jump up on furniture, and never stole food off tables or counters, even if it was only inches away from her nose.

At one point she did start hectoring moose and chasing cars, but that was all part of the herding instinct. In Palmer, we were the only house at the end of a long subdivision road, and she did her best to control any vehicle entering her territory.

Now, with many miles to Texas ahead of us, we stopped in southern Canada at a veterinarian in Kamloops. Reluctantly on my part, since I really

didn't want to see my dog drugged. The three of us walked in and in short order were ushered into an examination room. Gary explained the situation to the vet and what he wanted. To my surprise, she started laughing and said, "Your dog is showing typical behavior for her breeding. I really don't have anything I can give her, but I probably could come up with something for you."

Gary was quite disgusted as we walked back out to the truck empty handed. 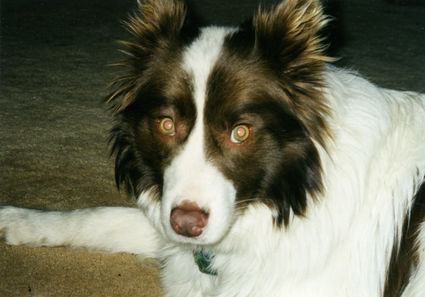 Patches' border collie lineage drove her to try to herd everything.

We made it safely to Texas, where Gary took Patches to a vet in his mother's hometown. This vet actually gave him some pills that were supposed to take the "edge" off-the dog, that is. And, this vet wanted to take a picture of her. He had worked with many border collies from the surrounding ranchlands, but had never seen one with as thick and luxurious of fur coat as Patches'. Of course, her thick fur didn't help much in warm Texas winter weather and was certainly a pain to wash when she insisted on rolling in fresh cow pies.

On the way back to Alaska, she needed half a pill only twice between Texas and Colorado, where we picked up a dog kennel. Because the kennel was too big for the cab, we placed it under the canopy in the truck bed. We couldn't see or hear her and since it faced backwards and was packed in with so much other stuff, she only had hindsight.

The next trip "Outside", Patches stayed at home in Slana with some wonderful dog sitters.