Trip a bust? Change it up, quickly 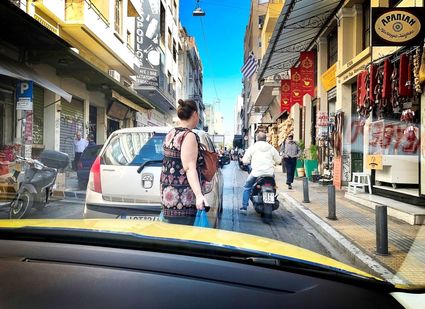 The overwhelming closeness, noise and bustle of humanity drove Jim and Ruth Lavrakas out of Athens after just a few days.

I once heard a story about an American couple, who traveled on a long-awaited vacation trip to India - they landed in Kolkata (once called Calcutta), took a taxi to the Hilton and never came out again until it was time for a taxi back to the airport.

How do you manage disappointment, or in this case fear of crowds, on arrival at the place of your dreams, only to find it so overwhelming you want to leave? It's a combination of flexibility, turning on a dime and travel insurance.

Recently, my brother Jim and his wife Ruth, she newly retired, took a month-long trip to the land of our ancestors - Greece.

"We like active vacations, so we spent nine days on the island of Corfu on a hiking holiday that was better than we had imagined," he said. "Once we were done with our Corfu portion, we arrived at an apartment rental set up for 12 days in Athens, very close to the Plaka, within spitting distance of the Acropolis. The traffic, people, density of buildings was overwhelming. We immediately started looking for ways to escape the city."

The hustle of the capital city along with smog and traffic was off-putting and they like more physical adventures than Athens had to offer.

"If you like activity, then Athens is not the place to deposit yourself, but as a base of operations it worked well," Jim said. "Our second cousin's boyfriend in Athens is a taxi driver, and Athens taxi drivers are infamous for asking for 'flat rates' when they should be charging by the kilometer. We used our cousin's boyfriend, Adriatik, exclusively as we found this former Albanian refugee to be one of the most honest, direct and friendly of people, with a harrowing tale of escaping the Communist dictatorship of the country when he was a teenager."

Our cousin suggested they get out of town and take ferries out among the islands.

"Making arrangements was pretty easy with the internet," Jim said. "Ferries were cheap (2-5 Euros) to the islands."

Their first island was Evia, where they rented an Air BnB for four nights, but had to rent a car to get to the little villa, and that process was not as difficult as they thought.

"But the actual driving was terrifying," he said.

"We discovered life in an island town was much like that of our little hamlet of Homer, with locals moving much slower than the city. Our routine became one of early morning walks up behind our villa where we were greeted by locals with a good morning ("kali mera") and one wizened old man insisted we take one of the pomegranates from his tree."

"We discovered a restaurant in the town of Eretria that we went to every day for our big meal of the day around 4 p.m. Greeks eat late and we had the place, and our waiter Alex, all to ourselves."

They headed back to Athens to experience Oxi Day, the national holiday celebrating the one-word refusal by Greek leaders to the fascist ultimatum of 1940. Oxi means "no" in Greek.

Then it was off to the island of Aegina, a 75-minute ferry ride from the port of Piraeus near Athens. Again, Air BnB made it easy to find accommodations. They chose a boutique hotel run by a half Greek, half Swiss owner. Two nights there with a few side trips to smaller fishing villages broke up the days.

"In the end we probably scheduled too many days in Athens. On a previous trip we'd seen many of the ancient ruins and museums in Athens, so better research on my part for things to see and do would have made for a better visit," Jim said.

"It was 28 days of wonderful travel, but we had to work at it a little to make it successful."

Tools for the trip

There are several things that help you to make decisions and move on with your vacation.

The Internet. Many older people don't use a computer or have a smartphone. Consumer Cellular (www.consumercellular.com) offers inexpensive plans that can help you connect with family and friends and travel services while away. AARP also has a division that deals only with travel at http://www.aarp.org/travel, with lots of advice and some good discounts.

Really, take a look at your grandchildren, who at an early age already know how to navigate the Web.

When you purchase travel insurance, it protects you from certain financial risks and losses while traveling - a delayed or lost suitcase, last-minute trip cancellation or overseas medical emergencies.

No matter where you are on the globe, travel insurance can assist you, from interpreting the local language to replacing a lost or stolen passport, and it also protects your investment in the trip, which can be substantial.

If you'll be away for a long time, this is something you want to look into.

But don't forget to check if the credit card you'll be using has a travel insurance component, saving you the added cost of purchasing insurance.

Arrive early in the morning, before 9 a.m., to beat the crowds climbing to the summit of the Acropolis in Athens.