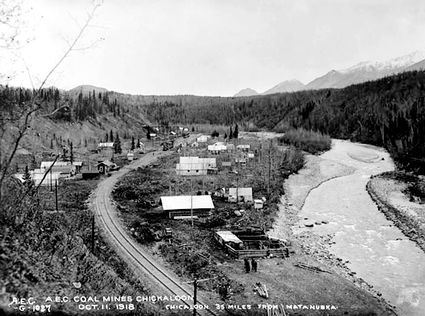 In the early 1900s, coal was being shipped from as far away as Cardiff, Wales, to the U.S. Navy's coal station at Sitka. Some thought that the coal deposits at Chickaloon in the Matanuska Valley might meet the Navy's requirements.

Along with federal Bureau of Mines director A.M. Holmes, Jack Dalton went to look the mine over in 1913. When Holmes concluded the coal would suffice, he gave Dalton the task of figuring out a way to get the coal from the mine to tidewater – at a cost the Bureau could afford.

Dalton concluded that the Matanuska River, when frozen, could be used and that horses could do the conveying. He headed for Seattle where he picked up supplies, men and horses. He headed back to Alaska on Nov. 5 aboard the General Hubbard, recruiting more men along the way.

He reached Knik Anchorage at the mouth of Ship Creek on Nov. 16 and put his outfit ashore. Moving up the east bank of Knik Arm, the party reached Old Knik, above Eklutna, where Dalton established his headquarters.

Forty-five miles of road and many bridges would be required. Three miles ran from the mine to the bank of the Matanuska River, and then from Eska Creek, the road would go to a tidewater landing.

As soon as the ice was thick enough, freight began to move. Fifty-four horses pulled five bobsleds, which carried from three to seven tons of coal. By January 1914, 700 tons had been carried as far as Eska Crossing. By Feb.1, the entire lot had left Chickaloon.

One month later, 900 tons of coal was stacked up at ice-blocked Cook Inlet. The estimated cost of freighting the coal stood at $65,000.

Later, after the ice went out of the Inlet, the coal was placed aboard the battleship U.S.S. Maryland, for testing. But before anything could be done about providing a regular supply of coal, the Navy converted to oil.

Although the Navy didn't use the coal, far-reaching consequences followed Dalton's successful plan. An article in the July 1963 Alaska Sportsman said the Matanuska coal had a great deal to do with the decision to build a government railroad from Seward to Fairbanks:

"By the time Jack Dalton died in 1944, the town at the mouth of Ship Creek, created by the railroad, was well on its way to becoming the largest city in Alaska."

The Alaska Railroad erected a historical marker at the spot formerly known as Matanuska Landing, where the railroad track now crosses the Matanuska River. It commemorates Jack Dalton's efforts to bring the Matanuska coal to tidewater.

This column features tidbits found among the writings of the late Alaska historian, Phyllis Downing Carlson. Her niece, Laurel Downing Bill, has turned many of Carlson's stories – as well as stories from her own research – into a series of books titled "Aunt Phil's Trunk." Volumes One through Five, which won the 2016 gold medal for best nonfiction series from Literary Classics International, are available at bookstores and gift shops throughout Alaska, as well as online at http://www.auntphilstrunk.com and http://www.Amazon.com.