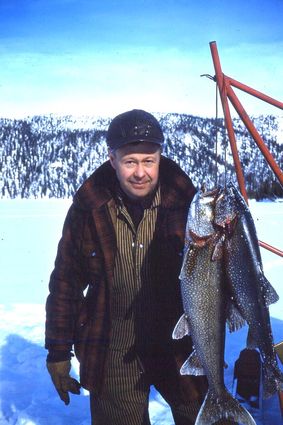 By Al Clayton, Sr., as told to Maraley McMichael.

Recent clear sunny days in make me think of going ice fishing. I've made many winter fishing trips through the years, but one in particular stands out in my memory.

While living in Anchorage in the early 1960s, I made a trip to Copper Lake in the Nabesna Road area. I chose March because it usually brings beautifully clear, cold weather to interior Alaska. Another fellow, Buck Moore, made the trip with me. Buck was a camp cook for Lee Hancock and I knew him because I had guided big game hunts for Lee for over 10 years. My snowplane is the vehicle we used for travel off road.

I had built my snowplane in Seward in the mid-1950s, modeling it after some vehicles I had seen in Montana. It had three skis. The ski in front was about 8 foot while the skis on each side were about 9 foot. I welded a frame together using 2-inch metal tubing. The body was a combination of wood, aluminum, canvas, plastic and fiberglass. I brazed the metal tubular body bracing and riveted other parts. The four-cylinder, 85-horse power Continental airplane motor was mounted on the back with a 70-inch propeller.

It sure was a lot of fun to build.

I loaded my gear: Groceries, sleeping bag, canvas tarp and even a 20-pound propane tank and propane stove. Buck and I drove to Slana towing the snowplane on a trailer behind my 1956 Chevy station wagon. We packed the gear in the ahkio, an army-type fiberglass toboggan I pulled behind the snowplane. I drove the snowplane over to the Copper River and we traveled right up the river to Copper Lake. It was a great ride. There was no overflow. Even though there was some broken, rough ice, the long skis went right over it with no problem.

Once we got to the outlet of Copper Lake, we went about a mile up the lake and fished not too far from where Doug Frederick's cabins are nowadays. We camped nearby, within walking distance of our fishing hole. I didn't bring a tent. My army sleeping bag was good for 30 below zero, which is about how cold it got.

That first night, my feet were cold, so I put some warm rocks from the fire area in a burlap sack and put that at the bottom of my sleeping bag. They were too hot at first and I had to let them cool off some. We decided to drink all our liquids by early afternoon, so we wouldn't have to get out of our sleeping bags at night.

The next morning, we got up and made coffee and breakfast. One thing you want to remember when you're camping and it's that cold, is to have your spoon warm before you put it in your mouth. After breakfast there wasn't much to do but walk over to our ice hole and see if we had a lake trout. The sun was bright during the day and afternoons were quite warm, but each night the temperature dropped to around 30 below. We were also careful to use our sunglasses.

Since the snow on the lake was so smooth, I decided to try out my snowplane one afternoon and see how fast it would go. I gave it full power and I know if it had been an airplane, it was going fast enough to take off.

We stayed three or four days, but we never did use the propane stove or tank, since I forgot to bring a wrench. We got two real nice lake trout. The longer of the two was 30 inches.

With the great weather, about 60 miles of snowplane travel, ice fishing, and camping outdoors, I'd say it was a successful trip. 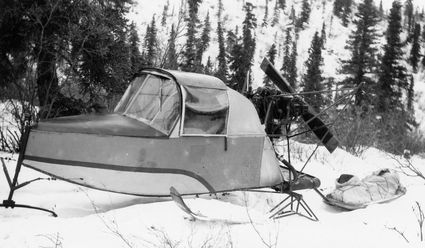 This story was written in March 2004. After enjoying 68 Alaskan winters, Al Clayton, Sr. passed away in 2008 at age 94. Al's snowplane was restored in 2010 by Don Burt of Anchor Point and can currently be viewed in the Anchorage Museum until April 5, 2020, as part of the "Snow Flyers" display. "Snow Flyers" celebrates decades of northern ingenuity for survival, sport and transportation. For more information on the display, visit http://www.anchoragemuseum.org, and click on "Exhibitions".