Graveyards tell a tale for everyone to see 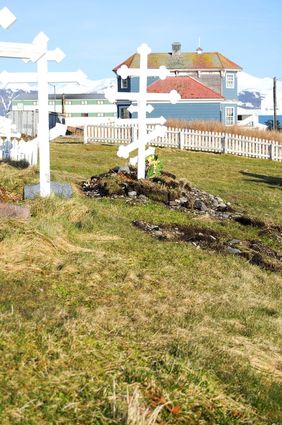 In Unalaska, the Russian Orthodox Church of the Holy Ascension has a small forest of crosses surrounding it.

It may seem macabre, but visiting graveyards is a time-honored activity. Other than our relatives, cemeteries can reveal the lives of famous people and the many who left the world they departed a better place.

Living in New England now, I am struck by the old-time fire and brimstone on the gravestones in nearby cemeteries that go way back to 1644. And the quality of the carvings in the tight crystals of local granite have weathered the centuries well.

While steam engine followers have earned the name of "foamers," you can become a so-called "tombstone tourist," or maybe you already are.

The term "tombstone tourist" comes from the 2003 book "The Tombstone Tourist: Musicians," by biographer Scott Stanton that chronicles visits to the graves of famous musicians.

In Lowell, Massachusetts, where I grew up, people still make a pilgrimage to the restless Beat Generation writer Jack Kerouac's final resting place, and in Paris, the monument to rock star Jim Morrison is still a draw in the Pere Lachaise cemetery, along with the graves of British playwright Oscar Wilde, singer Edith Piaf, writer Molière, and artist Eugène Delacroix.

In Anchorage, the Anchorage Memorial Cemetery at Ninth Avenue and Cordova Street holds the remains of one of the state's greatest artists, Sydney Laurence, along with family names that are recognizable in street names - Delaney, Dimond. Or Dr. Joseph Romig, for whom a school is named, Robert Reeve of Reeve Aleutian Airways, Harry Kimur, who founded the Snow White Laundry, and Chief Ezi, widely respected chief of the Tanaina.

My brother told me when we were living across the street in a tiny pioneer cabin that the homeless used to take up residence in the pre-dug graves in the winter and cover the hole with plywood, their Sterno stoves castling a ghostly light until rousted by the police.

All over Alaska there are unique graveyards to visit, one being the Russian Orthodox Church of the Holy Ascension in Unalaska on Unimak Island. The double crosses of the Orthodox religion were introduced in the 6th century before the break between Catholic and Orthodox churches. In 1551, Ivan the Terrible, Grand Prince of Moscow, first used this cross on the domes of churches. From this time on it was shown on the Russian state coat of arms and military banners.

The upper bar represents the inscription over Christ's head while on the cross saying "This is Jesus, King of the Jews," the long middle bar is his arms outstretched, and the lower slanting bar, his footrest.

In Eklutna, the combination of Russian Orthodox and Native American tradition at the St. Nicholas Orthodox Church cemetery holds over 100 colorful burial sites. The spirit houses, each about the size of a large dollhouse, are part of the Eklutna Historical Park.

Over 800 years ago, Eklutna was the site of many Athabascan villages and today Dena'ina descendants live there.

Up the Klondike Highway from Skagway north to Carcross, Yukon Territory, a Tlingit village, there's a graveyard my late friend Alice True took me to once that was overwhelmingly of the Baha'i faith, which had a number of Native followers because of the respect shown to people's traditional spiritual beliefs.

In Skagway, in Southeast Alaska, the Gold Rush Cemetery holds the grave of Frank Reid, the town's initial surveyor who was shot by the notorious gangster Soapy Smith in a mutual shootout that took the lives of both. Smith died quickly but Reid hung on for twelve days with an agonizing injury to his groin. Smith has a headstone there too, and it is rumored that his body was swept away in the great flood of 1901. But don't tell the tourists this.

My father's favorite headstone is in the Slide Cemetery in Dyea next to Skagway. It was the trailhead for the Chilkoot Trail that took 1898 stampeders into British Columbia and then on to the goldfields in the Yukon Territory, site of the Klondike Gold Rush.

It simply says "Noscitur Shot in the Mountains May 1st 1898" and the anonymous deceased lies in the burial place for the over sixty victims of the April 2, 1898 avalanche on the Chilkoot Trail. The Tlingit packers had cleared off the trail after warning the gold seekers of the danger.

I looked up the term "noscitur' and it seems to be a legal term that loosely translates to "known by the company he keeps." I guess they weren't nice guys.

Dawson Charlie or Káa Goox, a Canadian Tagish/Tlingit First Nations person who was one of the co-discoverers of gold along with his uncle Skookum Jim Mason in the Yukon that led to the Klondike Gold Rush, died in Carcross, Yukon, when he fell off the White Pass & Yukon Route bridge Dec. 26, 1908.

The WP&YR also took two others, Maurice Dunn and A. Jeneaux, when it was being built and their bodies rest under a one hundred-ton boulder after a blasting accident. Both still lie under the rock, named "Black Cross Rock," at Mile 10.4.

In New England, the earliest headstones offer an afterlife of punishment for worldly sins with their carvings of stern, winged angels and skulls and crossbones. They are occasionally relieved with the symbol of eternal life - the fountain - or a finger pointing to heaven hoping to give the right direction to the deceased.

But there are also heartwarming tributes to lost loved ones. My favorite is in the First Parish Burial Ground that dates to 1640 in Gloucester, Massachusetts.

"Here lies the Mortal Remains of Coll John Stevens who died April 13, 1779, in whose Character was United, The Firm Patriot, The Useful Citizen, The Exemplary Christian, The Affectionate Husband, The Tender Parent, Social Friend, And Honest Man."

Can't do much better than that. 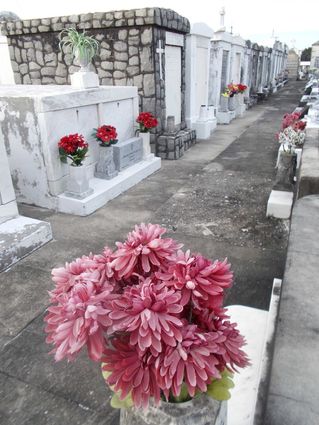 In New Orleans, the dead are buried above ground in solid stone vaults to protect them from ground water.

- The Anchorage Memorial Park Cemetery hosts a Stories at the Cemetery Tours in August. Check the cemetery’s Facebook page for this summer’s event at http://www.facebook.com/ events/344416 749800477. Ten stories are presented by costumed actors on Alaskans who were early pioneers, miners, politicians, business owners, upstanding citizens and some who came to a bad end. Bring your own chair and enter at the John Bagoy Gate at the corner of Seventh and Cordova. Free and open to the public.