Anchorage booming into a 'Baghdad on the Tundra' 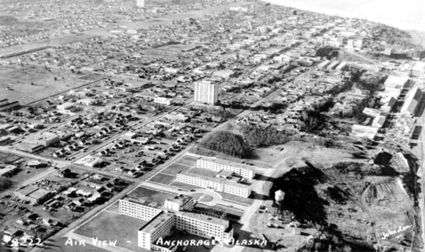 By 1951 Anchorage was a bustling, growing city.

By the early 1950s, the tent city at the mouth of Ship Creek had turned into a bustling, modern city. Clifford Cernick wrote that Anchorage was much like Baghdad in an article that appeared in the Seattle Times on March 4, 1951 – a time when Baghdad was a bustling city, a jewel in the desert.

"A grizzled prospector, back in Anchorage after three years in the Alaskan wilderness, noted the towering framework of a new apartment building, the paved streets, the bustling downtown traffic and glistening shops.

"Nudging his companion, he declared: 'Hey! Look what they've gone and done to Anchorage!'"

Cernick wrote that old-time prospectors, Natives from remote Bering Sea villages and the majority of tourists from the States all thought Anchorage was an amazing town.

"Mingled with the town's frontier atmosphere is a new spirit of feverish construction and growth. It is a city reaching for the clouds, with one 14-story building planned and several others on the drawing boards," Cernick wrote.

"The average Statesider's conception of life in the 'ice-locked land of glaciers, totem poles and Eskimos' is shattered forever when he notes the city's modern buildings, its three radio stations, three theaters, two newspapers and well-stocked shops."

He added that the downtown area was a hub of activity.

"Along Fourth and Fifth avenues – the city's main stems – frontier-type honky-tonks stand side by side with gay, sophisticated night clubs. Multi-colored neons splash glittering pools of color across the wide, paved streets at night."

Cernick noted that women in fashionable mink coats were as much a part of the Anchorage landscape as Native maidens with moose-hide parkas. And that dogs and sleds didn't warrant any more notice than panel delivery trucks. He said it was normal to see business executives and bank presidents sharing lunch counters with trappers and prospectors.

The reporter said the contrast and modern style of the town caused one airline pilot to make the observation that struck Cernick as fitting.

"An airline pilot, arriving over Anchorage at night after the long flight from Tokyo and seeing for the first time its pattern of flickering lights, winking like jewels in the midst of a vast, forbidding wilderness, described the city as a 'Tundra Baghdad.' In many respects, the name fits.

"Since the Second World War, the city has been charging ahead like a down-river steamer at full speed," Cernick wrote. "In 1940, the census credited Anchorage with a population of 3,495. Today, the city proper has 11,060, and when suburban areas are counted, the total is close to 30,000.

"In the past few years, a city-wide swath of cleared land has been moving steadily southward. Hundreds of settlers have come and have constructed homes, roads and streets...."

But he also noted that all Alaskans were not too pleased with the evolution of Anchorage into such a going concern.

"An Alaskan old-timer named Russian 'Jack' is not too happy about what he calls 'all this hustle and bustle.' Gazing down traffic-choked Fourth Avenue, the city's main thoroughfare, Jack remembers he 'used to hunt moose there,'" Cernick wrote.

However, noted Cernick, the "city's younger generation, unhampered by memories of the past, is looking to the promise-filled future – the not-too-distant time when Anchorage will rival many of the large cities in the States."

This column features tidbits found among the writings of the late Alaska historian, Phyllis Downing Carlson. Her niece, Laurel Downing Bill, has turned many of Carlson's stories – as well as stories from her own research – into a series of books titled "Aunt Phil's Trunk," available at bookstores and gift shops, as well as online at http://www.auntphilstrunk.com and Amazon.com.