Less than half of the letters Clara wrote to her sister, Martine.

My mother's handwriting jumped out at me as I pulled out the contents of a 1960s-era postmarked envelope. What a wonderful surprise, I thought, as I read her letter and set it aside. I was half an hour into sorting through a large box full of my Aunt Clara's letters about a year ago. The box contained hundreds of letters, which covered the years 1954 through 2008.

My mother was less than three years older than her sister, Clara, and they had a very close relationship. Perhaps partly because their father died when Mom was 13 and Clara was 10, after which they had to move into a children's home where their mother found employment as a "house mother". After Mom left New York for Alaska in 1951 for a three-year term as a Methodist missionary nurse, they stayed in touch by mail. Long distance phone calls were unusual at that time, let alone all the instant communications we have now days.

After Mom's passing in 1998, I sorted through boxes and boxes of paperwork. Every time I found an "Aunt Clara" letter, I threw it into a large box, which eventually became full. The box remained in storage in Homer until three years ago, when I brought it and all the years of Christmas cards and letters my parents received over the years, to my garage in Palmer.

I wanted to send the box of Aunt Clara letters to her daughter, Karen, in New York. After Aunt Clara died in 2000, I was hoping a box of Mom's letters would be sent to Alaska and was quite disappointed when none surfaced. Knowing how I felt, I was sure my cousin Karen would treasure her mother's letters, so I pestered my sisters about sending them to her.

But they were both adamant that the letters had to be scanned first, thinking of possible family history. Since I'm in my senior years and purposefully choose how to spend my remaining time, I was unwilling to scan these hundreds of letters. My sisters were willing but very busy with daily life. So, nothing happened.

One cold February morning last winter, I decided to get the box out of the garage and organize the letters first into decades and then into years. Perhaps my sisters would find it easier to scan one year at a time. Since most of the letters were in their original envelopes, I glanced at the postmark and put each in the appropriate pile. If the postmark date was not readable, I had to open the envelope, open the letter and check for a date. That's when I unexpectedly found one of Mom's letters. Half an hour later I found another one, but she had been known to write a letter and not get it mailed, so I assumed that was the explanation.

A third letter of Mom's turned up. At the very end were the words "Please return." Instantly I realized if mom asked for this letter to be returned, there could be others. I knew I had to open every envelope and check. I finished sorting and then beginning with the earliest years, checked all contents. Hours later, a total of 52 of Mom's handwritten letters had surfaced. I was flabbergasted and immediately emailed my siblings about the fantastic "buried treasure" I'd found. I would have unwittingly sent all Mom's letters to Karen if it hadn't been for my sisters' insistence of scanning.

Of course I was willing to scan Mom's letters. I so enjoyed reading them, savoring one or two a day to soak in the details. I gave one sister the 1990s and the other sister the remaining decades. After a few years were successfully scanned, I sent a package to New York. When Karen received it in June 2019, she immediately called with tears in her voice to thank me.

Then in September 2019, while in Glennallen on a cranberry picking trip, I retrieved the other box of Aunt Clara letters in storage from the years prior to Mom and Dad's move to Homer, and discovered another 40 of Mom's returned letters. Full of rich detail, she writes of ordinary life, birthday parties, once-in-a-lifetime events like the 1964 earthquake, and other milestone adventures, activities and mishaps. While reading, I found the words "please return" written in a variety of ways. On one letter Aunt Clara wrote, "How's your 'book of life' coming along? If only we lived closer so I could type your pages for you." 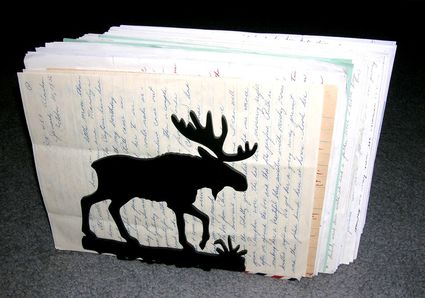 Family treasure of over 100 of Maraley's mother's letters.

Most recently in February 2020, while sorting and organizing our grandmother's letters covering the years 1955 through 1978, I found an additional 12 Mom letters. One dated March 31, 1964, begins with, "Dearest Mother, now that I'm finally able to sit and tell you our earthquake story, I don't know where to begin." I wouldn't be surprised if more are waiting to surface.

I'm astonished none of us knew of this arrangement about returned letters, but thanks to Mom's forward thinking, we now have a cache of over 100-a wonderful "diary" written in her own hand, discovered more than 20 years after she left this earth.