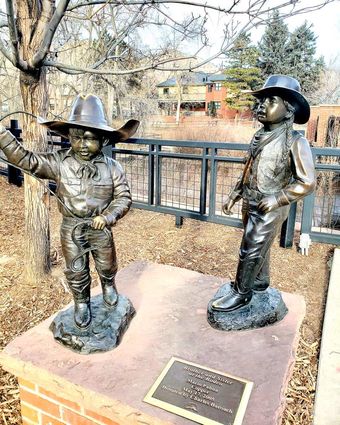 A statue commemorating Golden's rich history in the West stands along the Clear Creek trail.

Wild West, here we come; cowboy boots, big belt buckles, and a sense of adventure in tow. It's Golden time.

Golden truly is "Where the mountains meet the plains," nestled in beautiful Clear Creek Valley. Surrounded by high points – North and South Table Mountains, and Mount Zion and Lookout Mountain to the west, Golden sits in perfect position for stunning vistas and delightfully old-fashioned images of stagecoaches, cowboys, and redder-than red sunsets.

One of Colorado's most historic towns, and also one of its oldest, Golden has grown from sleepy mining and ranching city into a popular bedroom community of Denver, and a hotspot for foodies and outdoor enthusiasts of any age. Founded as a gold mining town in 1859 and named for early prospector Thomas Golden, the city was Colorado's first capital (so designated in 1862), and stayed that way until Colorado became a state in 1876 and larger Denver stole away the title.

Visitors to Golden will be charmed by the city's homey approach to life, from expansive walking trails along Clear Creek, to friendly restaurants, shops, dog parks and plentiful activities for everyone at the local community center. Visitors are welcomed to pull up a stool at the local diner's counter and talk over an order of biscuits and gravy; dogs are meant to be petted on the sidewalk; and parkland visited on a sunny Saturday afternoon.

Walk in the footsteps of Colorado's pioneers with Golden History Tours. This two-hour walking tour through the heart of Golden's downtown is a delightful look at the stories of the city, and happen throughout the year. http://www.goldenhistorytours.com

Visit Golden History Park, a short walk from downtown. Historic cabins, an heirloom garden, and artifacts from the city's early days are on display at this local attraction. Free. http://www.goldenhistory.org

Check out Buffalo Bill's Gravesite and Museum: Buffalo Bill Cody was the world's first superstar, and the most famous army scout and showman of the Old West. Buffalo Bill chose to be buried in a scenic spot on top of Lookout Mountain with views of the plains and snowcapped peaks. http://www.buffalobill.org

Connect with an old Alaska friend. The Bradford Washburn American Mountaineering Museum opened in 2008 and is a wonderful way to explore the works of noted explorer and geographer Brad Washburn, who mapped his way around the Alaska Range with bush pilot Don Sheldon. A must-see for anyone who craves the high peaks of the world, but especially in the Rockies. http://www.mountaineeringmuseum.org

Yes, Coors Brewing Company is still in operation in downtown Golden, and has been since 1873. Free tours are offered each Saturday, and are usually crowded, so get in line early. $10/non-Colorado visitors, $5/Colorado residents, free for military. http://www.MillerCoors.com.

Peruse the Foothills Art Center. Located in the heart of downtown Golden, galleries are situated in a gorgeous Gothic church, listed on the National Register of Historic Places. Exhibits showcase artists of regional, national and international renown, featuring traditional and contemporary artwork. http://www.foothillsartcenter.org

Attend a play at Miners Alley Playhouse. An intimate 120 seat theatre featuring award-winning professional theatre at affordable prices and at a very convenient location, Miners Alley is a fun way to cap off a Golden visit. http://www.minersalley.com

Golden, Colorado: If you go

City of Golden Visitor Bureau: http://www.visitgolden.com/. Find a wealth of activities, recreational pursuits, and a calendar of events suitable for all.

Getting there: Alaska Airlines flies into Denver International Airport via Seattle. United Airlines has one scheduled daily flight from Anchorage direct to Denver.

Road-tripping the United States? There are five major highways (I-70, Hwy 6, Hwy 58, Hwy 93 and C-470) that lead to Golden. Golden is located at the foothills of the Rockies just 20 minutes from downtown Denver.

From downtown Denver and the airport, the city's light rail system is a nice way to go car-free. For $5, a three-hour pass gets you transportation to the outskirts of Golden proper. There are also many ride-share options from anywhere in the greater Golden area. A handy app is available for easy route directions and ticket purchase options. http://www.rtd-denver.com.

Accommodations: City of Golden offers a wide range of bed and breakfast lodging, RV parks, and traditional hotels, including several in the historic downtown district. http://www.visitgolden.com/your-visit/lodging/

Note: Golden, like Denver, is located a mile above sea level, so for those unaccustomed to such elevations (ahem, Alaskans), it is wise to acclimate for a few days before charging into the mountains or planning a long bike ride. Those with pre-existing heart conditions should check with their physician for other tips to make activities more comfortable.

Erin Kirkland is an Anchorage- based freelance travel journalist and author.