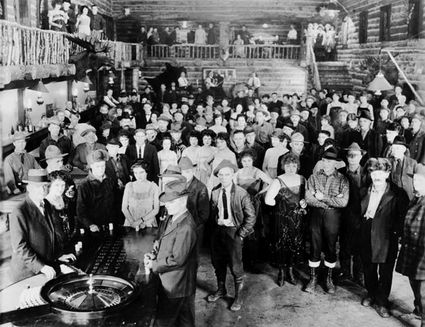 Many Anchorage residents enjoyed a bit of celebrity as they portrayed dancehall enthusiasts in Austin E. "Cap" Lathrop's production of "The Cheechakos" in 1923.

Movies about Alaska, mostly based on books by Jack London and Rex Beach, thrilled audiences during the early 1900s. But all motion pictures were filmed outside of Alaska. So when a group of Oregon promoters planning a travelogue and feature film about the territory toured Alaska's towns in 1922, several Anchorage residents decided to go into the filmmaking business themselves.

They formed the Alaska Motion Picture Corp. and elected Austin E. "Cap" Lathrop, who owned theaters in Anchorage, Fairbanks, Seward, Valdez and Cordova, as president. The businessmen raised $75,000 to produce a 12-reel picture, which included a three-reel travelogue followed by a nine-reel drama.

The group built a 7,000-square-foot studio in downtown Anchorage with an eye to becoming the "Hollywood of the North." About 1,000 Anchorage residents hosted a "free dance and jollification at the moviedome" to welcome the cast of actors recruited from Oregon, New York and Hollywood when they arrived in 1923.

Shortly thereafter, the cast and production crew traveled by train to McKinley National Park to film winter scenes with dog teams to show the drama of the gold-rush days. They also traveled to Girdwood, where they recreated the days of 1898 when miners climbed the Chilkoot Trail.

The Anchorage Daily Times reported on the production of the silent film in its April 4, 1923, edition:

"The struggles of former years will once again be fought by real veterans of the early days, many of them still retaining and wearing the identical garments and packs, such as jackets, parkas, fur hats and pack boards used by their owners during the stampede days over the great Chilkoot Pass. Tandem dog teams will once again hit the trail with the Yukon sled in prominence. The vast illumination will portray sled loads of supplies of flour, bacon, salt, beans, sugar, coffee, tobacco and other bare necessities used by the prospectors."

The script of the only movie made by the Alaska Motion Picture Corp. tells the story of two good-hearted gold prospectors who take in a young girl who was left motherless after a ship explosion. When the sourdoughs strike it rich, the younger miner falls in love with the girl. Through tough experiences, they all learn that disreputable gamblers can be as dangerous as the frozen north.

When released in New York in May 1924, Variety dismissed the plot as "hokey," and expressed doubt that a film with such an unpronounceable title could succeed. Indeed, "The Cheechakos" failed in the Lower 48 and dropped from movie history.

Although Lathrop and his group had hoped to make more movies in their Anchorage studio, they soon modified it into an exhibition center for the Western Alaska Fair during the 1924 Labor Day weekend. It later served as the Anchorage community center for years.