Washing was part of the price of log homes 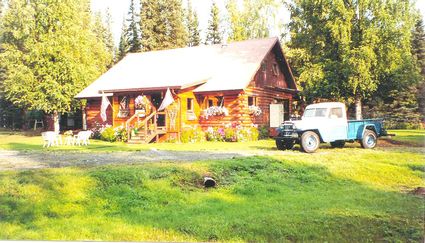 I welcome the sight of springtime sunlight streaming through the south facing windows of my home, but along with that comes noticing dirt on the window glass and a thicker than usual layer of Matanuska Glacier silt on the window sills. Although I no longer live in a log home, this reminds me of the following story I wrote back in 2004.

"What do you mean 'washing logs'?" asked the lady at the other end of the phone. I had just mentioned I needed to get back to my project of washing logs.

Upon explanation that I take a damp cloth and wipe the top half of each log in the interior of my house, she laughed and made a disparaging comment about the cleanliness gene in me. To which I replied, "When people can write notes in the dust, it is long overdue."

It has been two years since I last completed this chore and it only took a couple hours of work to remind myself why I'd been dragging my feet. It's not just simply a matter of wiping the eight-inch logs. There is so much preparation work.

First, I have to take the pictures, art and decorations off the walls and then move furniture to get the 6-foot stepladder close enough to the 8.5-foot walls. Since I clean everything that is removed from the walls, clean the light fixtures, and wash the curtains as I go, it's easy to get sidetracked.

There's also a certain amount of fixing and repair work that goes on. I noted several places where the 2002 (Denali Fault) earthquake had caused the logs to pull apart enough to break the caulking seal and now the insulation shows. A broken piece of pretty green glass trimmed in gold was waiting for me above a kitchen cabinet. After that big earthquake, we did emergency survival clean-up, but no log washing.

Usually the goal is to try to complete one room before moving on to the next. But at one point, I had three rooms torn apart all at the same time. The family room/office required the biggest rearranging upheaval in order to accommodate a new computer desk.

A week after I started, after interruptions of cooking, eating, sleeping, church, tea with a friend, and attending a birthday party at the school, I pronounced the downstairs "done". Soon I would tackle the upstairs and give it a onceover, but there are no logs to wash up there. We had a mouse invasion while we were gone for a few months this winter and I wanted to find the deposits and stashes before our bed and breakfast guests did.

Some would call this process "spring cleaning", although I've never been a big fan of ritualized cleaning. The first time I washed logs in this house was in August almost five years ago, before we moved in. Since there were no obstacles, it only took a couple of days, and produced much less grumbling, muttering, and yelping from banged knuckles.

I have recruited my husband's help at times - he vacuumed the bear hide and helped move some furniture and the ladder a time or two. But, he mostly found projects of his own to work on and tried to make himself scarce during the week.

In recent weeks, I have talked to several log homeowners regarding their log cleaning process. It seems there are two groups of people: those who use Pledge and those who use water. A lady here in Slana "Pledges" her logs at least every six months and dusts with a dry cloth in between. Her home looks like it could be displayed in the glossy pages of "Log Homes Illustrated." Others, like me, just use a damp cloth ideally once a year.

The smoothness of finish on the logs is key to the frustration level of cleaning. This is the second log home I've lived in and washed. Some of the bark on the logs in the first home was left on for "character". In that home, washing the logs took a lot longer because the damp rag got hung up so frequently on the bark. Even in this home, little fibers of whatever color cloth I've been using can be spotted here and there when I'm finished. 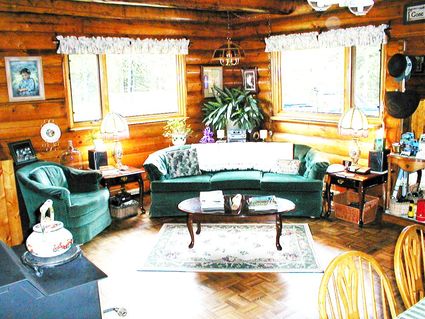 The living room of the McMichaels' log home. A ladder was required for cleaning the logs.

At this moment, another beautiful log home is being built in Slana, but the owners are using three sided eight-inch logs, which will eventually be finished to a flat interior surface, eliminating the need for log washing. Of the log home owners I talked with, about half said they would certainly build with logs again, while the other half vowed never again.

We receive many compliments from bed and breakfast guests about our beautiful, well built log house. I kept reminding myself about that as I continued to tackle my task throughout that week of cleaning. And, sure enough, the day finally came when I sat on the couch with teacup in hand, and looked up to see the sunlight bounce off the shining Varathane-coated logs, instead of being absorbed into the dust.

Along with a feeling of the satisfaction of a job well done came a resolve to not wait two years until the next time.