The sweet and pungent science of garlic 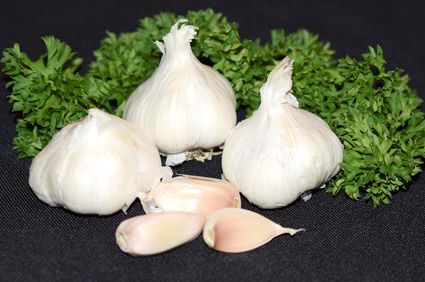 If you plan on celebrating National Garlic Day on April 19, remember the old New York Yiddish saying, "A nickel will get you on the subway, but garlic will get you a seat." Even a well-known Muslim prophet supposedly once informed his followers: "Whoever has eaten garlic should not approach the mosque."

Despite its much-maligned odor, garlic is a wonderfully versatile cooking ingredient that has been cultivated for thousands of years. The production of smelly odors is actually a defense mechanism that some plants use to protect themselves from predators. While an undamaged clove of garlic is almost odorless, crushed cloves quickly release the characteristic pungent odor of its legendary reputation.

The cells of garlic, like all plants, are protected by tough cell walls. Inside the garlic cells is an odorless substance called alliin. Outside the cells is an enzyme called alliinase, which also has no odor. When a garlic glove is damaged, the cell walls rupture and the alliinase and alliin combine to form another substance, allicin which produces the characteristic garlic odor.

And therein lies the cook's secret to using garlic. The more the garlic clove is mashed, the more allicin will be released and impart a stronger flavor to food. By contrast, leaving the clove intact or cutting into only a few slices produces a fainter garlic flavor.

Heat can also transform garlic's pungent properties. When whole cloves are simmered or roasted, the alliin is converted into new substances before they have a chance to react with the alliinase. This can impart an unexpected sweet buttery flavor to the garlic.

Precooking garlic can add a delightful, milder flavor to food. A bulb of garlic brushed with olive oil, sprinkled with salt and pepper, wrapped in aluminum foil and baked at 325 degrees for 1 hour, produces a sweet, caramelized product that can be used in a variety of recipes. Beware, however, copious garlic odors may be released from the oven and you may need a Hazmat suit to enter the house.

Whether you cook with finely chopped garlic, whole cloves, or some form in between, there exists a wealth of flavor opportunities awaiting the cook who experiments with garlic preparation methods.

But garlic odor is permeating. The mere act of chopping it, even if uneaten, can cause it to be absorbed by the skin and released in the breath for days after. The main culprits here are malodorous sulfur-containing compounds, formed when the allicin is metabolized in the body.

Garlic odor can also linger on a cook's hands for days. To help remove the odor, wet your hands with cold water and sprinkle salt all over them. Then squeeze some lemon juice on your hands and rub them together for a minute or two, and rinse with soap and warm water. Repeat if necessary. The abrasive action of the salt particles helps to release the garlic chemicals from your skin, and the chloride of the salt combined with the acid in the lemon will make the smelly compounds more soluble and easier to wash out.

Despite its smelly side effect, Americans love their garlic. The Christopher Ranch in Gilroy, about 30 miles south of San Jose, Calif., processes some 100 million pounds annually. No wonder Gilroy has been called "The Garlic Capital of the World."

In fact, Will Rogers once said of the town, "Gilroy is the only place where one can marinate a steak just by hanging it up outdoors."