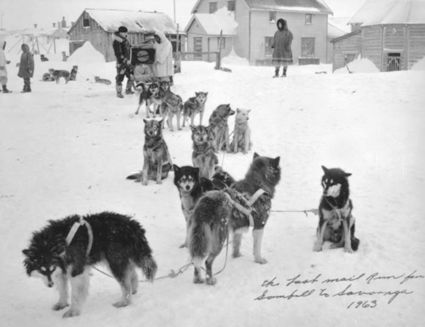 Dogs gear up to haul the U.S. mail on its last sled run between Gambell and Savoonga in 1963.

The establishment of airplane competition didn't stop Chester Noongwook of St. Lawrence Island from continuing his dog sled mail service run until 1963. His was the last mail delivery of its kind in the country.

Wien Airlines established the first commercial airplane base on St. Lawrence Island at Gambell and built a landing strip at Savoonga. The company took over the mail-carrying duties for the U.S. Post Office. But Noongwook was retrained on a supplemental basis whenever the planes couldn't get through. For six years, Noongwook never once let bad weather keep him from carrying the mail between Gambell and Savoonga.

He had the last laugh on the planes that superseded him, too. A modern airplane, delayed by bad weather, caused the young mailman to be late for what may have been one of the most important occasions of his life – receiving an award from the post office upon his retirement.

Noongwook, who made his weekly 100-mile runs sometimes in blinding snowstorms where visibility was about 10 feet and temperatures ranged to 40 degrees below zero, was four hours late for a special ceremony in Fairbanks when fog prevented his airplane from departing Nome.

He didn't know why he was to report to Fairbanks, and when he finally arrived at that city, he was overwhelmed when presented with a large, framed certificate as movie cameras began to roll and flashbulbs clicked all around him. After the presentation of the special award – the first of its kind – for outstanding service as the last dog sled mail carrier, Noongwook enjoyed dinner with many high-ranking government officials.

With that ceremony, the curtain was drawn on an exciting, dramatic era when dogs carried the mail in Alaska. It seems fitting to close that chapter of Alaska's history with a poem by Alaska Nellie Lawing. She and her dogs had carried mail and knew from firsthand experience that:

The Mail Goes Through

It matters not how rough the trail,

You must fight it through when you take the mail.

It matters not how the north wind blows

How bitter cold or how hard it snows.

Remember, it's not how or what you do

The important thing is – the mail must go through.

Do your best to succeed – you dare not fail –

For you must mush on when you take the mail.