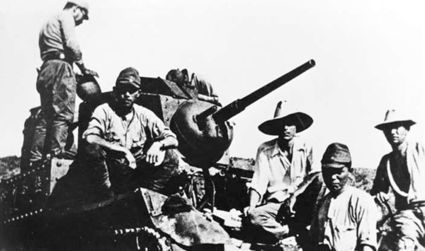 Japanese troops settle in to defend the Aleutian Island of Kiska during 1942.

The remote islands of the Aleutian Chain, home to the Unangan people for more than 8,000 years, endured the first invasion on American soil since the War of 1812.

On June 6, 1942, at around 10:30 p.m., 500 Japanese troops came ashore at Kiska. They captured a small American naval weather detachment of 10 men, along with a dog. One member of the detachment escaped, but surrendered after 50 days – thin, starving and cold.

Villagers, who'd been expecting American evacuation ships, instead found themselves running from bullets that Sunday morning. Thousands of Japanese troops poured over the hills surrounding the village of Chichagof – shooting as they came and wounding several villagers.

"The Japs are here," screamed an Aleut woman amid a hail of bullets as she rushed into the cabin of Bureau of Indian Affairs teacher Etta Jones.

Jones' husband, a 60-year-old radio technician who operated a government radio and weather-reporting station, began transmitting messages of the attack to Dutch Harbor.

Soon the Japanese were on the couple's doorstep, and the Joneses surrendered. Most sources agree that Charles Foster Jones was taken by the enemy and never seen again. Some sources say he was executed, others say he committed suicide.

The villagers were all rounded up and herded to the schoolhouse. Once they all were accounted for, the Japanese allowed them to return to their homes, said Olean Prokopeuff (Golodoff) in a story that appeared in an Aleutian/Pribilof Islands Association Inc. article for Aang Angagin. Prokopeuff, who lived through the event, said bayonet-carrying enemy soldiers guarded them.

The Japanese kept the Aleut fishermen busy for three days supplying the troops with food. Then the villagers were told to grab some food and personal items for themselves, because they were leaving the island. Prokopeuff said she then watched as Japanese soldiers burned her home.

Etta Jones, 62, and the village's 40-plus Aleuts were transported in the hold of a freighter to Hokkaido, Japan, for internment. Prokopeuff said they were kept in the unpleasant-smelling hold for the entire trip, never seeing daylight until they reached Japan.

Etta Jones was separated from the Alaska Natives and interred at Yokohama, along with U.S. Navy personnel captured on Kiska, while the Aleuts were interred at Otaru, Hokkaido. Only 20 Natives survived the ordeal and returned to Alaska after the war ended.

After the Aleuts departed, the Japanese garrisons, which now numbered more than 11,000 troops, set up defensive positions on Kiska and Attu and began watching for attacks from the Americans.

The U.S. military finally ousted them from the islands in May 1943.