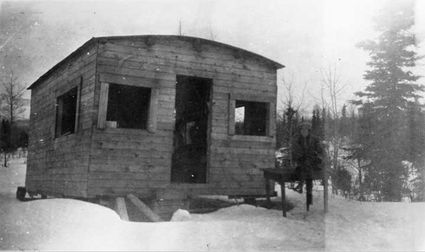 Many early Anchorage residents enjoyed illegal libations made in bootleggers' cabins, like this one near Chester Creek.

When the U. S. Army took over responsibility for administering Alaska in 1867, law enforcement found it had its hands full trying to stem the flow of liquor into the territory. Up until alcohol possession was legalized in 1899, smugglers brought their illegal brew into Alaska via whalers, fishing vessels, American and foreign ships and Indian canoes from both British Columbia and U.S. ports.

Enforcement also had problems controlling the manufacture of "hootch," a name taken from the Tlingit village of Hootchenoo or Hootznahoo. The distillers of "this vile stuff" had learned their trade from soldiers stationed at Sitka.

Since the opportunity to make a bundle of cash in the illegal trade of spirits encouraged dishonesty, many early government officials looked the other way. Some even assisted the smugglers. Evidence that law enforcement was ineffective in rooting out "the demon rum" was evident in Southeast Alaska, where 27 saloons operated openly in Juneau in 1895, and just about as many flourished in Sitka and Wrangell.

However, the tide turned against the smugglers in 1898 when a grand jury in Juneau indicted seven customs officers: four who helped smuggle liquor into the territory and three who sold impounded liquor to thirsty prospectors.

Dry laws were enacted in Alaska in the early 1900s and not repealed until 1934. But that didn't stop smugglers from getting alcohol into the railroad town growing along Ship Creek, even though the Alaska Engineering Commission had banned spirits on its property.

On June 19, 1915, President Woodrow Wilson issued regulations pertaining to the Alaska Railroad Townsite that later became Anchorage. The detailed rules for the conditional sale of lots at public auction contained one clause that reflected hopes for high standards of sobriety. The lots and payments for them would be forfeited if the property were "used for the purpose of manufacturing, selling, or otherwise deposing of intoxicating liquors as a beverage, or for gambling, prostitution, or any unlawful purpose...."

While teetotalers, government officials and law enforcement kept a wary eye out for liquid contraband, bootleggers managed to supply those thirsty for their product by coming ashore in what's known as "Bootleggers Cove," an area hidden by a bend in the shore line along Cook Inlet.

Bootlegging continued to be an underground industry during the 1920s, and Anchorage children were paid a $5 reward for telling officials about the locations of illegal stills.

But even respectable families dabbled in the "devil's drink." Some made their own home brew, while others, like Frank M. Reed, made a few bucks off the thirst of their neighbors. Reed, who later became an Anchorage banker and community leader, started his entrepreneurial career collecting bottles discarded by guests at his mother's Anchorage Hotel and selling them to bootleggers for 35 cents a dozen.