When bees and bears collide 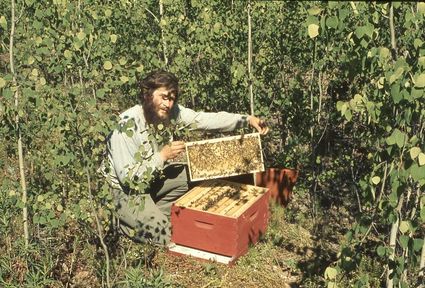 Gary McMichael with his bees in summer 1974 before the bear disturbed them.

During our first summer of trying to be self sufficient and live off the land, my husband, Gary, decided to keep honeybees. The year was 1974 and we lived 23½ miles out of Fairbanks on the Chena Hot Springs Road. Once he got the bee hive box situated near the edge of the woods, they needed little attention.

One evening in late July, upon returning from a day in town, we noticed the hive box had been toppled over. Gary walked over to investigate and decided from the signs that a bear had come to visit while we were gone. He was used to working with bees without a head net or gloves. His patience and slow movements kept him from getting stung. That was not the case this evening, though.

He discovered the bees were very angry at being riled up and they immediately attacked him. He ran through the willow bushes, which were about as big in diameter as his thumb, to try and brush off and lose all those terribly angry bees. After several minutes, he walked back to the trailer, our home. We inspected the damage and found eleven bites on his face, neck and arms.

We knew that honeybees could sting only once because they leave their stingers behind in their victims. He started pulling the stingers out until he came to the ones in his forearm. Then he just sat there entranced as the little stingers continued to pulsate.

Realizing later they were still pumping venom into his arm, he wished he'd removed them immediately.

Soon his face started to swell and by the time we finished dinner, one eye was completely swollen shut. The other eye was just a narrow slit. We went to bed but were awakened about 5 a.m. the next morning by a loud banging and thumping noise. The bear was back and he was smashing our empty water barrel around the yard. Although he could only see out of the crack of one eye, Gary picked up his 44 magnum and standing there in his underwear, shot out the back door of our trailer home. The little black bear, which was only about 15 feet away, did a complete somersault and took off running into the woods.

Now Gary was concerned about a wounded bear out in the woods somewhere. Our nearest neighbors were about a quarter mile away. Considering what to do next, he decided to get dressed, have some coffee, and eat breakfast. He wanted to be fully awake and hoped the bear would use the time to settle down and die. Then, carrying his rifle, barely able to see, he set off in the direction the bear was last seen. It was still early. The sun shone brightly through the trees and all was quiet, except for the birds.

After he got into the woods a ways, he heard twigs breaking in the distance. The noise was coming from a large thicket of willows in front of him. The sound came from the east, so he decided to head around the willows to the south and see if he could get a clear shot. He would hear a twig snap and walk a little, then hear another twig snap and proceed farther. Then, kneeling down, he waited patiently.

He hadn't heard anything for quite a while, but kept his eyes glued to the spot where the last noise had come from. All of the sudden, from behind, he heard the crashing and thudding of something coming toward him through the dead leaves. His heart started pounding. He turned with dread and saw a snowshoe hare! He looked at the hare and the hare looked at him. After a while the hare scampered off.

After he recovered from the fright, he heard a twig snap back at the spot where the bear was supposed to be. He continued on around the little hollow full of willows and discovered the bear. Sure enough, it was dead.

"Well, the fun is over and the work begins," he thought to himself.

Gary packed the bear back to the trailer which was only a couple hundred yards away.

He did all the processing of the meat and I packaged it for the freezer, which was located at a neighbors place since we didn't yet have electricity. That little black bear had been gorging himself on blueberries, so he was most delicious and very tender, too. In fact, we served bear stew every time we had company that winter. We still have the hide.

It took about three days for the swelling in Gary's face to go down, but otherwise he had no ill effects. Shortly after that he moved the bee hive box up onto the roof of the woodshed, where hopefully it wouldn't be disturbed again, and the bees went on to produce several pounds of sweet, light colored honey before freeze-up arrived. 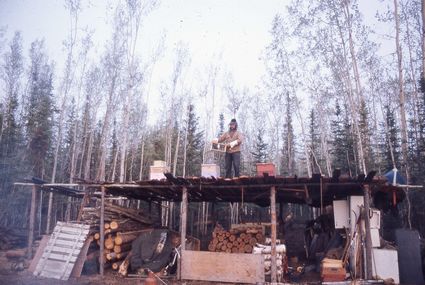 Gary McMichael working with bee hive boxes on top of the woodshed in spring 1975.