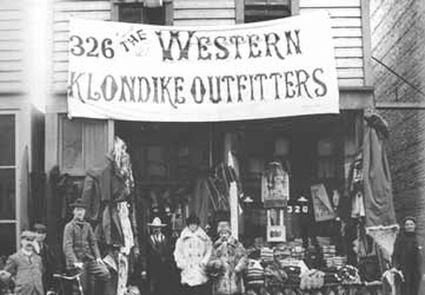 The Western Klondike Outfitters carried many goods that a stampeder might need in his quest for gold.

Glowing reports, like the following excerpt from the Aug. 8, 1897, edition of the New York World newspaper, helped fuel the stampede for gold along the Yukon River.

"Mr. J. O. Hestwod, one of the most successful argonauts of '97, has just returned from Klondike and furnishes by telegraph to the Sunday World a true picture of Alaska as it really is. He said:

'Modern or ancient history records nothing so rich in extent as the recent discoveries of gold on the tributaries of the Yukon River.

'The few millions of dollars recently turned into the banks and smelters of Seattle and San Francisco from the Klondike district is but a slight indication of what is to follow in the near future. When we consider the fact that there is scarcely a shovelful of soil in Alaska and the Northwest Territory that does not yield grains of gold in appreciable quantities, who can compute the value of the golden treasure that this great country will yield in the next few years?

'The Yukon River, which forms a great artery flowing through this frozen, rock-ribbed region for 2,600 miles, seems to be a providential highway, opened up for the pioneer gold hunters and their followers, who are numbered by thousands yearly. There is room in that country for 100,000 miners for 100 years. I do not make this statement from what someone else has told me, or from what I have read. I speak from actual experience in that land of gold.'"

Other publications, including The Chicago Record, printed lists of supplies needed by those seeking to travel to the gold fields of the North. The papers stressed that, based on reports of hundreds who had traveled to the placer mines of the Klondike region previously, each man would need at least one year's supply of food, clothing and working materials.

The Record's analysis showed that men who'd lived in Alaska among the gold-bearing creeks for anywhere from one to 10 years, figured that an adequate supply of food per day per man varied from 4.5 to 5.5 pounds. That brought the actual food supply for one person for one year to 1,600 pounds.

"Highly carbonaceous food should predominate; stimulants of alcoholic character should be avoided," the Record reported. "One pound of tea is equal to seven pounds of coffee for drinking purposes; three-quarters of an ounce of saccharin (this concentrated sweet can be obtained from druggists) is equal to twenty-five pounds of sugar, so that three ounces of saccharin is equal to 100 pounds of sugar. Citric acid is a remedy for scurvy."

The newspaper went on to list essentials for a gold-seeker's outfit, including 150 pounds of bacon, 250 pounds of flour, 40 pounds of rice, matches, a gold pan, one teapot and a whipsaw.

The estimated cost per outfit of food, clothing, hardware and medicine, of which one bottle "good whiskey" was a part, came to about $140.