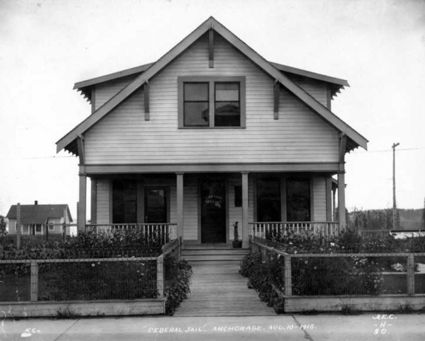 Anchorage's early jail, in use from 1914 until 1953, originally sat at Fourth Avenue and F Street.

Criminals dabbling in everything from prostitution to bootlegging to gambling flourished in the Alaska territory during the late 1800s and early 1900s. Believing that gold miners and other citizens easily could be parted from their hard-earned income, thugs crossed the border into Alaska when law enforcement in the rest of the United States cracked down on their criminal enterprises.

A January 1921 newspaper article from Juneau captured the flavor of the situation:

"In anticipation of an influx of criminals to Alaska, due to the drive to rid the cities on the outside of the thug element, Chief of Police T.E.P. Keegan is taking steps to secure the cooperation of the federal authorities in Alaska and at the points of debarkation, to have every man coming into Alaska inspected, with a view to ascertain their antecedents, and if not able to prevent them from coming in, to have each one accompanied by a complete record of his character, provided he has a criminal record.

"The matter has been taken up by every city in Alaska with the idea of being able to keep tab on every vicious character coming into the country. Such crimes as that of Monday night when a crew of alleged pirates arrived in Juneau after having, it is alleged, beaten up and robbed the owner of a gas boat and escaped from Petersburg, has awakened the authorities to the necessity of being prepared to cope with a possible flooding of the territory with desperate characters...."

Alaska's early jails didn't just fill up with criminals caught by the long arm of the law. They also served as asylums for the insane and often sheltered those who couldn't help themselves, including alcoholics and injured indigents.

The U.S. marshal supervised the territory's jails, which included a variety of temporary facilities like a building constructed from metal landing mats in Valdez and a dry well in Kenai. In smaller communities, early territorial police took prisoners home with them or put them in hotels until the malefactors were arraigned or put on trial.

The Anchorage jail, built at the corner of Fourth Avenue and F Street, served the community from 1914 to 1953. It originally housed the U.S. marshal, but in later years was used exclusively as a jail.

Multiple-occupant cells surrounded an open vestibule, where an oil-fired stove provided heat. Prisoners often escaped from the facility, though, because all they had to do was pull up the floorboards, crawl out and run away.

When the new Post Office and Federal Building was designed, the community moved the jail to Third Avenue and F Street and reinforced the walls and floors with tin sheathing.