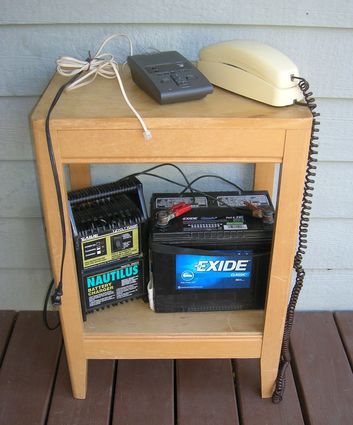 The collection of equipment needed for the McMichaels to have a working phone answering machine during their years of living on generator power in Slana.

"Where have you guys been all week?" our son, Patrick, demanded when I answered the phone one morning back in October 1999. He was calling from his home in Colorado.

"I've called three different days, morning, afternoon and evening, and you're never home. I thought something happened to you," he scolded. After we discussed which days and what time of the day, I realized we'd been out of the house on each occasion. In the morning we had gone to the post office, a couple days later during the afternoon we were out splitting wood, and then in the evening we were at a school activity. My husband Gary and I had recently moved from Palmer to Slana and actually enjoyed not having the phone ring so often.

"What's the matter with your answering machine?" Patrick continued. "It would've been nice to just leave a message, so you'd know I was trying to get a hold of you."

I explained that when we left the house for a few hours or we were outside working, we shut the generator off and the answering machine didn't work when the power was off.

"Well, when you're outside or gone, that's when you need an answering machine the most. There's got to be some way," he responded.

"Okay, son, we'll think about it. Sorry we had you worried."

Actually, I thought to myself, maybe that's a bit of payback for all those teenage years.

The next time we drove to Anchorage, Gary had three extra items on his list and a plan. We came home with a 12-volt answering machine, a new car battery and a new battery charger. He set up the battery and charger on a small end table behind the couch out of sight and hooked everything up: answering machine to battery, battery to charger, charger to wall socket.

Then one afternoon before we started the generator, we called Patrick and said, "call us back to test out our new answering machine." While he was leaving a message, we picked up the receiver and said, "So, what do you think? It only cost us $100. Now if we don't answer the phone, you can leave a message 24/7. Are you happy?"

I gathered up our fancy (two-line, caller ID, built-in answering machine) phone unit that we had brought from Palmer and placed it in a box labeled "electric items for the future." It shared space with a portable phone unit, a radon detector, two radio alarm clocks, and my electric skillet, all of which no longer worked well with generator power in our new home.

While in Anchorage we bought two additional new phones – the simple kind that plugged into the phone jack and required no electricity. It seemed we were spending more money to go backward in technology.

Although Slana is on the road system, our new town had no commercial power. But we at least had real phones. Just a few miles farther down the Nabesna Road, people either had radio or satellite phones, or did without.

When the generator was running, the battery behind the couch was being charged and so was always available to make the answering machine work. This three-part system worked great for years. It kept us out of trouble with our son and later proved equally important with our bed and breakfast business.