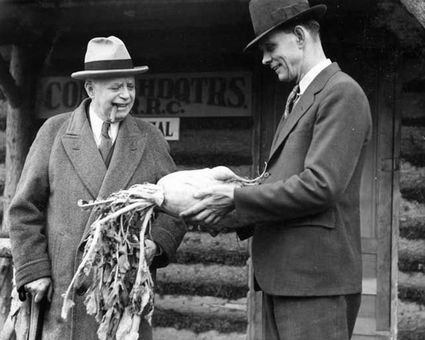 John Weir Troy, left, was Alaska's first sourdough governor and served the territory from 1933 to 1939, until ill health forced him to leave office.

Alaska's governor from 1933 to 1939 believed that more people and more roads would help the territory achieve statehood. And John Weir Troy, who came to Alaska during the gold rush in 1897, thought a larger population and a better road system would help achieve that goal.

"More people for Alaska is her greatest need," said the former pack-train worker. "But they won't come, and we could not take care of them if they did, until we have roads to take them to the valleys, hills and mountains where gold is locked in.

"...People coming to Alaska to farm or to prospect for gold and find employment in public works would furnish population that would make markets for agricultural products, timber, and other of the vast resources of the territory.

"The success being worked out through the Matanuska Colonization Project has added a promising outlook for the Territory. Not only has it added to the population in the vicinity of the Matanuska Valley and along the Alaska Railroad, but it has caused the people in other districts to become agricultural minded ... I believe that agricultural colonization should be carried further with the establishment of more colonies in other parts of Alaska," he said.

Had Troy not been forced to leave his position as the territory's governor because of illness, more colonization projects might have dotted Alaska's landscape during the 1940s.

When Troy was appointed governor in 1933, Alaskans heaved a collective sigh of relief. Troy knew Alaska and knew what to do to make it stronger. He'd mined, mushed, trapped and fished with the masses. He'd been rich and poor, and he'd lived through hardships and knew about luxury. Governor "Johnny" was a true Alaskan through and through.

Born in Dungeness, Wash., Troy worked as an apprentice at his uncle's paper in Port Townsend following graduation from high school. He learned about type, galleys, picas and presses. But when he heard the tales of nuggets lining the ground in Alaska, the then 24-year-old set sail for Skagway on a boat carrying "other mules and some horses."

He didn't find nuggets, but instead found work hauling gold seekers from Skagway over the mountains and waterways into Whitehorse, where they then floated down the Yukon River to Dawson.

Old-timers considered Troy a real sourdough, a pioneer who toted his bit of sourdough from camp to camp to "start" his bread and flapjacks. And they believed in his vision that a large, permanent population would help Alaska become a state instead of just a territory of Uncle Sam's.