Every Thanksgiving memorable in its own way 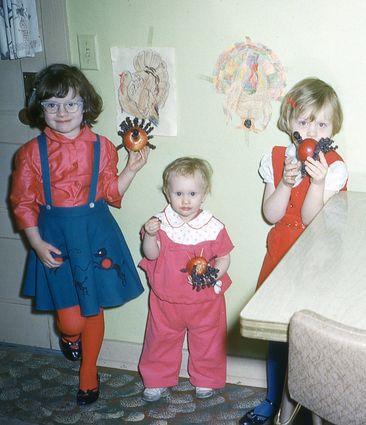 Maraley, Shirley and Jeanette Clayton with their apple turkeys, Thanksgiving 1960.

For me as a child growing up in Glennallen, it meant a big turkey dinner that we always ate with just our family of six. Dinner was served at the usual time in the evening because Dad worked at the Copper Valley Electric power plant during the day, even on Thanksgiving.

As I got older, I helped more each year with food preparation. We set the table with the real silverware out of the wooden chest, but used our everyday dishes. Most of Mom's good dishes were broken during the 1964 earthquake. Two covered serving bowls, a platter and a few other pieces survived and they had places of honor. Mom always got out her special vinyl print tablecloth.

My children have different memories because they were part of a big extended family that frequently gathered at our home. They had cousins to play with and aunts, uncles, and grandparents to entertain. Since family gathered from all around Alaska, there were overnight guests. My kids helped set up extra tables and chairs and set the table with placemats, matching napkins, and pretty glass dishes. Another one of their jobs was to make name cards using index cards and Thanksgiving stickers.

I passed my family's childhood tradition of making apple turkeys on to my children. We made wing and tail feathers by loading raisins onto toothpicks and then sticking them into the apples in strategic locations. The black olive head sat on a raisin-covered toothpick with pieces of pimento for eyes and waddle. Three toothpick legs were used for balance instead of two. An apple turkey sat next to each person's plate.

Although each Thanksgiving was memorable in its own way, some years stand out in particular. During one of the three Thanksgivings we spent in California near my husband's folks, we smoked a 30-pound turkey in a garbage can. We had raised it from a baby peep and were quite proud of it. The meat was delicious, but the dressing was so full of smoke we couldn't eat it.

Another year in the early 1980s when we lived in Cooper Landing, my husband and I, and our two kids, along with my dad and mom were invited to our neighbor's home. The neighbors were an elderly couple who had invited their daughter and her family of four, too. Thanksgiving morning, we had one of our frequent power outages because of bad weather. Dinner went on as planned, with one exception. Since their kitchen stove was electric, the turkey was brought over to our house to roast in my wood cook stove and was transported back and forth by snow machine. The rest of the dinner was prepared on a Coleman camp stove and we ate by candlelight, of course.

It was during one of our many Thanksgivings when we lived in Palmer that I read a Sunset magazine which featured a boneless turkey for the special meal. The idea being that the turkey carver would not have to carve, but merely slice down through the turkey. I followed the directions and was successful although the bird looked a little flat. I only did that once, but have since run into a lady who made her turkey boneless year after year.

During those years in Palmer when our house was centrally located for family living in Homer, Anchorage, Glennallen, and Tok, everyone arrived with contributions for the meal. We cooked, we ate, we visited, the kids played, and we had many ping-pong tournaments. Watching football is big with many families, but not ours.

With my husband's week-on/week-off oil job on the North Slope, there were some years that he was away for Thanksgiving. It was one of those years when he was at work, the roads were too bad for travel for some and others were too sick, when Thanksgiving at our house was just my two kids and me. We had a scaled down version of dinner with a turkey breast and a few trimmings. That experience made me realize that I greatly preferred the big family gatherings, even if they were a lot of work.

A few years later, we downsized to a much smaller house, and the family gatherings shifted to my brother and sister-in-law's home in Anchorage. It was our turn to bring a covered dish and travel on Thanksgiving Day.

The first year we moved to Slana, we saw an announcement for a community Thanksgiving dinner at the school and decided to attend. We'd only been living there for a little over a month and thought it would be a good way to meet some new neighbors. We'd heard the kids did the cooking, which also impressed us. The school gym was nicely decorated and full of people. But it was when some of the students stood up and shared what they were thankful for and some of the community members were moved to tears that I thought, "Wow, what a great little town we've come to."

The next year, dinner at my house was served on everyday plates because most of my good dishes were broken during the 2002 Denali Fault earthquake. A few platters survived as well as the "celery" dish and several other odds and ends, and they had places of honor.

During our snowbird years, we enjoyed dinners with our son and his wife in Denver and our daughter,

her husband, and their son in Fort Collins, Colorado, and even ate one Thanksgiving dinner at the Flying "J" truck stop in Cheyenne, Wyoming.

Since moving back to Palmer, we usually share a special Thanksgiving luncheon with the folks at either the Palmer or Wasilla Senior Centers. 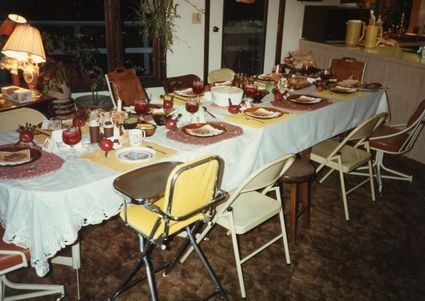 Regardless of the setting or the food, it's the gathering of family and friends that's important, and friends can be strangers we've just met. We've experienced many changes and a variety of settings through the years, but no matter where or how or with whom we celebrate, our hearts are full of thanksgiving and lots of memories.