This is your 100th birthday, Anchorage! 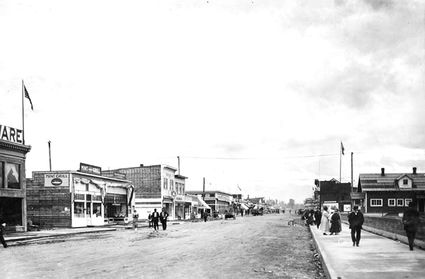 By 1920, residents had constructed 12-foot-wide concrete sidewalks along Fourth Avenue.

Technically speaking, Anchorage was born in November 1920. According to information gleaned by the League of Women Voters many years ago, it was eligible to become a first-class city because it had a population in excess of 400 – provided that two-thirds of the voters were ready to assume responsibilities of city government for its 2,500 residents.

A group of interested citizens filed a petition with the U.S. District Court at Valdez, which was the headquarters of the Third Judicial Division. The petition requested that a special election be held to determine the wish of the majority in the former Tent City.

Although there was some organized protest during a hearing on the matter, Judge Frederick Brown ordered an election. That ruling wasn't to be the last that Judge Brown would render on the issue, however. The judge would be called upon again after the citizens of Anchorage cast their ballots to decide the question.

The election returns showed a count of 328 votes for incorporation and 130 votes against. Another 85 ballots had been stuffed into the ballot box blank. If all 543 ballots were considered cast, then the percentage of those for incorporation would miss the two-thirds mark necessary.

After careful consideration, Judge Brown ruled the 85 blank votes were to be ignored. He decided it was as if those voters had not been to the polls at all and that Anchorage had voted itself into a corporation.

Anchorage became a city on Nov. 23, 1920, under the mayor-council system with Leopold David serving as its first mayor.

Boundaries for the new city stretched from one-half mile off shore in Cook Inlet to East G (now Gambell Street) and from 11th Avenue to Government Hill, including a small section that is now inside Fort Richardson.

Some say the golf course was originally planned as a firebreak between the city and the wilderness and was Anchorage's first airstrip in the early 1920s. Sources also say that during the early days of World War II, residents erected barricades of all sorts on the strip to prevent enemy planes from landing.

Primarily a railroad worker's town, Anchorage also became a trading center for miners, trappers and homesteaders who traveled via train, plane and dog team to stock up on supplies. The highway connecting Palmer and Anchorage, built by the Alaska Road Commission, wasn't completed until 1939.