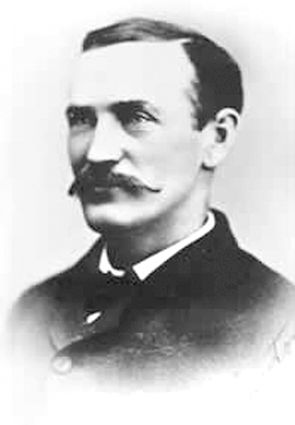 Frank Canton had a shady past when he hired on as a U.S. deputy marshal in Circle.

Alaska's first law officer in the Interior knew a thing or two about the criminal element. Frank Canton, appointed deputy marshal for Circle in winter 1898, had served with distinction as a peace officer in Wyoming and Oklahoma Territory. He'd also escaped from prison while serving time for bank robbery, murder and holding up a stagecoach in Texas.

The sketchy lawman's reputation as a range detective in Wyoming, notably as a killer for ambushing rustlers, secured his appointment in Alaska because he'd come to the attention of one very influential man.

P.B. Weare, a leading shareholder of the North American Transportation and Trading Co., which was challenging the monopoly of the Alaska Commercial Co., felt his business needed the protection of a vigorous law enforcement officer. Weare agreed to supplement Canton's $750 yearly salary.

On his way to his new post, weather forced Canton to spend the winter in Rampart in 1898. He tried his hand at prospecting but put his peace officer hat back on in April after passengers on board a steamboat wintering near Rampart mutinied against their captain.

They announced their intention to take the boat to Dawson as soon as the waterway opened.

After a two-day hike, Canton reached the vessel and arrested the leaders of the conspiracy. He then convened a meeting of the other passengers, and as judge, held a trial and fined the perpetrators $2,000.

When one of the takeover leaders attempted to kill him, Canton recognized him as a fugitive from Idaho with a $2,500 reward on his head. Canton arrested him, and as soon as the ice went out on the Yukon River, he hauled the fellow to Circle.

By the time he reached his new post, Canton found that most of the miners had moved on to Dawson. Their exodus meant that city coffers were limited, so the lawman had no funds with which to operate. He also found that no one in the community wanted to board federal prisoners for $3 a day, nor act as jailers.

Canton had to borrow money from the Northwest Trading Co. to meet the obligations of his office. Shortly thereafter, he wrote to U.S. Marshal James Shoup in Sitka requesting money to meet daily expenses and to construct a jail.

Before he heard back from Shoup, he had several more suspects accused of robbery and attempted murder in custody. The small U. S. Army garrison at Circle helped him guard his prisoners while he awaited funds.

To his dismay, the reply he received in March 1899 didn't include money for running the marshal's office nor any reimbursement for out-of-pocket expenses. Canton wrote an angry letter back to the U.S. Marshal.

"I need some money very bad and wish you would send in some funds at once," he ranted. By that time, Canton had eight prisoners he intended to take to Sitka for trial.

Canton never did receive any funds from Shoup. Instead, he was discharged as a deputy marshal when officials learned he had resigned his Oklahoma position while being audited for fraudulent expense claims. The Justice Department hadn't been aware that Canton had been appointed a deputy marshal in Alaska until late 1898.

He returned to the states and later became Adjutant General for the Oklahoma National Guard. Canton later arranged a meeting with the governor of Texas and confessed that he secretly was Joe Horner, an outlaw who had been wanted for bank robbery and murder.

The Texas governor took his law enforcement service into consideration and granted him a pardon. He chose to be known as Frank Canton for the remainder of his life, dying on Sept. 27, 1927 in Oklahoma.