Life and holidays at the Kenai Lake cabin 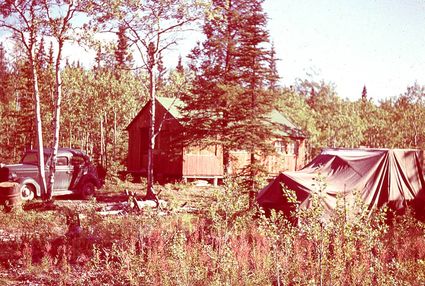 Al Clayton bought a summer cabin on Kenai Lake in 1946.

"My favorite place in Alaska is my Grandpa Clayton's cabin down at Kenai Lake," wrote Taral Clayton, my nine-year-old-niece back in 2004. "My Grandpa has a lot of neat things inside the cabin such as a whale bone, moose antlers, caribou antlers, and tree funguses. I like to go to Kenai Lake because there are so many different exciting things to do."

I had just started reading the rough draft of her paper titled "Kenai Lake," which was a third grade school assignment. Since Taral knew I was a former teacher aide, she wanted me to check her composition, spelling and punctuation. As I finished reading, memories of my own overwhelmed me.

As a young child in Alaska in the late 1950s and early 60s, I traveled with my family for the Thanksgiving and Christmas holidays, but not to grandparents' homes. In fact, we had no relatives of any kind living in Alaska. We drove from either Seward or Anchorage, depending on the year, and our destination was the Kenai Lake cabin near Cooper Landing. My parents brought along everything needed for fine celebrations. Thanksgiving included a turkey and dinner trimmings, but much more extensive packing was required for Christmas: a tree, gifts and a ham dinner.

At first they toted along one baby, but then through the years, three more children came to be. By the time four kids, clothes, food, gifts, etc. were packed for a long weekend or sometimes a whole week, the process took several hours.

After we moved to Glennallen in 1963, this family tradition didn't take place as often, mostly because of the 300-mile one-way travel time factor.

Originally one room, but added on to over the years, in the 1950s the cabin consisted of two rooms: a kitchen/dining room with the wood cook stove and a bedroom/living room

which had a wood heater stove. There was a slop pail next to the pitcher pump, an outhouse out back, and once in a while Dad fired up the "light plant" (generator), but mostly two, two-mantle pressurized Coleman lanterns provided light. Upon entering the cabin, there was always a certain familiar smell, which I would later learn was a combination of wood smoke and musty dampness.

After a two-hour drive from Anchorage in our 1956 two-tone green Chevy station wagon with no seat belts and lots of pillows, we arrived to a cold cabin. Sometimes Dad could drive right up to the door, but many times he had to shovel the snow berm at the beginning of the long driveway to get the station wagon out of the roadway. Then he made a trail to the cabin, went in and built a fire, and turned on the lanterns. Mom and we kids, most of who were asleep, got to stay in the warm cozy car until "the chill had been taken off" the cabin.

Once Dad gave the word, we were carried or walked carefully over the trail, everyone bundled in winter gear. After Mom and kids were settled in, Dad took the sled back to the car for another load.

After the bed sheets were opened and warmed and we were all tucked in our beds, Mom helped us sing nursery rhymes and Sunday school songs. Since I had already had a nap in the car, I usually wasn't sleepy. My wide-open eyes observed the moonlight on the various objects in the room. We all slept in the one room, so it was easy to hear the singing and the goodnight wishes from one to another. When a voice grew quiet, it was apparent one more child had fallen asleep. By 1962, what had been originally my crib, was inhabited by my baby brother. Dad and Mom had a double bed, while my two younger sisters slept in an oversized single bed. I had graduated to a narrow metal-spring, army cot arrangement, which I loved.

Mom used to like to tell the story of how when I was a toddler, I watched them go through the "packing up" routine, setting boxes and bags that were ready on the bed. She found me asleep standing up, leaning against the bed along with all the other stuff, as if to say, "Don't forget me!"

Back when I was three and had burned my finger on the heater stove, chicken wire "fencing" was installed around the perimeter of the stove and continues to remain in place to this day. I remember soaking my finger in a glass of cold water all evening and soaking up all the extra attention. 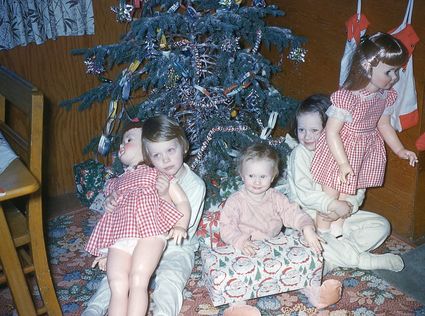 One early Christmas, Santa not only visited our cabin during the night with a sack full of gifts, but he left two giant, unwrapped dolls for my sister and I. Special Christmas storybooks and Santa Land punch out activity books provided much enjoyment that year and for many Christmases to come. The decorated tree was beautiful, but even more so when the generator made the lights work.

Looking back today, it means so much to read why the Kenai Lake cabin was special to my niece, Taral - the next generation. My two children also have plenty of memories of their own, having lived at the cabin for five years when they were very young.

Dad and Mom moved around the state and built, bought and changed homes through the years. My two sisters, brother and I have done the same with our families. Until it was demolished in 2019, the Clayton Family cabin, purchased by Dad back in 1946, remained a constant, a place for making memories.