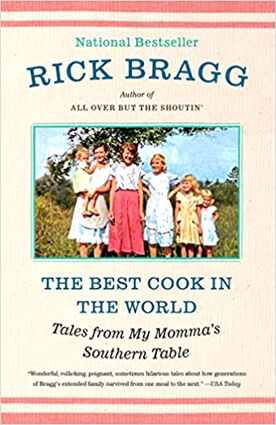 These books feature main characters who are older persons. I select highly-rated books that tilt toward uplifting rather than depressing. Some are light and humorous. Others are more thoughtful, maybe a bit philosophical. Perhaps you will find one or two you are compelled to read.

The Best Cook in the World: Tales from My Momma's Table, by Rick Bragg

"This is one of the sweetest, tenderest, most endearing memoirs I have ever read from a boy to his mother, his grandmother and grandfather, and all the cooks in his life. I love Rick Bragg and the praise for his books (he has won a Pulitzer) is well deserved. But you must listen to him narrate the book or you will miss the whole point. At first you will say to yourself, 'I can't listen to ten minutes of this slow, southern drawl.' Then after ten minutes you will say, I never want to stop listening! Loved, loved it from start to finish. The recipes are the pure south, and the stories are funny, touching and unforgettable." - reader review in Goodreads

My old friend John, who spent much of his youth in Alabama, loves Rick Bragg as a Southern author and also recommends this book to us.

The Reinvention of Albert Paugh, by Jean Davies Okimoto

"The Reinvention of Albert Paugh is a sweet, funny love story about retirees that will delight readers (and dog lovers) of any age. Dr. Albert Paugh is flunking retirement. After selling his Vashon Island veterinary practice, he soon finds himself not only lost without his work, but suddenly single. His

efforts to carve out a new life, both as a bachelor and a retiree, only leave him feeling like his "golden years" are fast becoming "years of gloom." His regrets pile up until he moves to Baker's Beach where he gets to know a very special neighbor, learns that friends are the family you choose, and finds a new sense of purpose." - publisher

This is a feel-good, heartwarming story. It put me in a very good mood. I thoroughly enjoyed it and I suspect you will too.

On Golden Pond, by Ernest Thompson

"This is the love story of Ethel and Norman Thayer, who are returning to their summer home on Golden Pond for the forty-eighth year. He is a retired professor, nearing eighty, with heart palpitations and a failing memory but still as tart-tongued, observant and eager for life as ever. Ethel, ten years younger, and the perfect foil for Norman, delights in all the small things that have enriched and continue to enrich their long life together." - publisher

The Book of Ebenezer Le Page, by G.B. Edwards

"Ebenezer Le Page, cantankerous, opinionated and charming, is one of the most compelling literary creations of the late twentieth century. Eighty years old, Ebenezer has lived his whole life on the Channel Island of Guernsey, a stony speck of a place caught between the coasts of England and France yet a world apart from either. Ebenezer himself is fiercely independent, but as he reaches the end of his life, he is determined to tell his own story and the stories of those he has known. He writes of family secrets and feuds, unforgettable friendships and friendships betrayed, love glimpsed and lost." - Publisher

Crossing to Safety, by Wallace Stegner 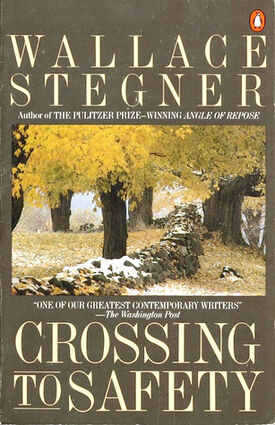 "Called a 'magnificently crafted story . . . brimming with wisdom' by Howard Frank Mosher in The Washington Post Book World, "Crossing to Safety" has, since its publication in 1987, established itself as one of the greatest and most cherished American novels of the twentieth century. Tracing the lives, loves and aspirations of two couples who move between Vermont and Wisconsin, it is a work of quiet majesty, deep compassion, and powerful insight into the alchemy of friendship and marriage." - publisher

"We follow two married couples from their bright eyed 1930s youth to their retirement years. There's no razzle dazzle, no shocks or mysteries, no scandals or horrors. Their hurts are subtle and familiar. The writing is solid and reflective and downright beautiful. I found the story to be mostly about acceptance. Loving people even when you don't like them. Finding satisfaction in life even when your plans fall through. Not settling, not feeling trapped or resentful, but just learning to be OK with your life and appreciating what you have instead of wasting your life obsessing over what you don't have. A curiously ordinary yet elusive concept."