A magnificent home for a famous inventor 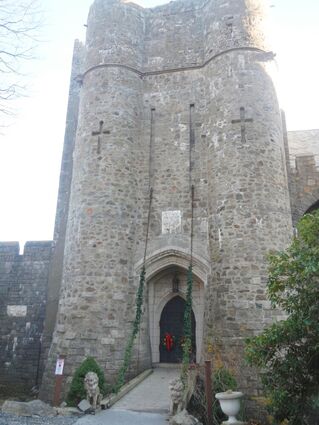 At Hammond Castle in Gloucester, Massachusetts, your guided tour begins by walking across the drawbridge.

Come the time when we are able to travel freely, consider skipping Disneyland to visit a real castle on Cape Ann, just an hour north of Boston.

Rising on the shore of Gloucester, Massachusetts, the first light of day strikes Hammond Castle illuminating its leaded stained glass windows and lighting up nearby Norman's Woe, the scene of Henry Wadsworth Longfellow's tragic poem "The Wreck of the Hesperus."

The son of John Hays Hammond Sr., who became wealthy as a mining engineer in Cecil Rhodes' mines in South Africa, the senior Hammond lived up the coast in his own mansion. Hammond grew up in South Africa and then in England where he became fascinated with castles.

But John Hays Hammond Jr.'s fame relies on his inventions and patents. Claiming mentors of both Thomas Edison and Alexander Graham Bell, he registered more than 800 foreign and domestic patents on more than 400 inventions, generally in the fields of radio control and naval weaponry. He is called the "Father of Radio Control" and credited with developing modern missile guidance systems as well as conducting some of the earliest experiments in frequency modulation (FM) broadcasting and inventing single-dial radio tuning. He also devised an amplifier used on long-distance telephone lines.

After leaving his father's home he decided to build a castle that would be not only a home for him and his wife Irene but also house his laboratory.

Hammond Castle was constructed between 1926 and 1929 and includes a drawbridge, where you begin your tour of the castle, flying buttresses, a massive inner courtyard with a 30,000-gallon, 9-foot-deep pool, and a bell tower that rang on the hour. Complete with gargoyles, the building is composed of modern and 15th, 16th and 18th century architectural elements.

The Boston, Massachusetts architectural firm of Allen & Collens was hired in1923 to design Hammond's dream residence, a medieval-style castle. He reconsidered the intended 120-foot ceiling and lowered the design to 87 feet, although standing in the middle of the main hall you might think they are 120 feet because the scale of the walls and ceilings are so foreign to the simplicity of our own homes. The height of the castle itself was lowered, but a wider footprint of 142 feet by 70 feet was created.

In the Great Hall, which echoes the lines of a Medieval church nave, the gigantic pipe organ rises. Designed and built by world-famous organ builders over a period of 10 years, it has 8,400 pipes hidden behind the walls and was at the time one of the largest pipe organs in the world. The spacious keyboard is visible as are the fake metal pipes that tower over it. Hammond, though no relations to the company that began making Hammond organs in 1935, did incorporate many of the features of John Hays Hammond Jr.'s 19 patents for pipe organ technology. The design of the wind boxes, as well as the placement and installation of the organ within the Great Hall were in keeping with Hammond's style. However, Hammond could not play it, but he invented a device inside the console that could record what was being played. Renowned organists came to play it, but unfortunately it is no longer playable and needs expensive repairs.

Lavish parties, practical jokes and quirky embellishments marked Hammond's stays. A clerestory roof in the Courtyard is being restored. In that room there's a pool surrounded by plants and ferns that Hammond tinted green to look like a pool in the tropics. Although it looks shallow because the color hid its real depth, it was deep enough for him to amaze visitors by cannonballing into it from his second floor bedroom. He would sometimes turn on the rainwater feature for atmosphere.

A nude statue of him stands next to the pool with a modest fig leaf requested by his wife.

The castle is an incredible experience, and yes, while there may be other castles in the United States like the William Randolph 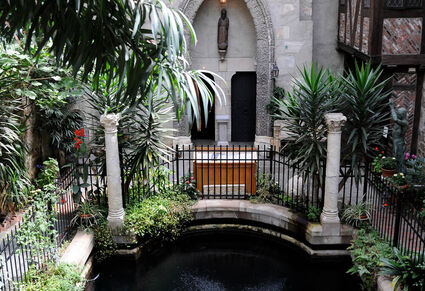 The pool in the courtyard provided both a swimming pool and a source of practical jokes.

Hearst Castle at San Simeon, California, Hammond Castle delights with the stories of over a half-century ago when the 1920s roared and the upper class spent their money freely on whimsical architecture.

Admission prices are adults $18; seniors older than 65 years, $15; children ages 5 to 12, $10; and ages 4 and younger are free, but require a ticket. You may take a guided tour or just wander. It is currently open seasonally, but does have holiday events like Thursday night spiritualism tours - a nod to Hammond's fascination with the occult - or candlelight tours. In October there is usually a haunted house that delights hundreds of visitors. The arms and armor tour would appeal to medieval fans. The one-hour tour, including a lecture, centers on Hammond's interest in historical weapons and his collection.