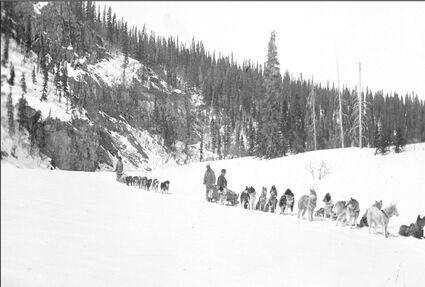 It took Clarence and Ethel Berry three months to travel 900 miles from Juneau to Fortymile via sleds pulled by dogs.

A few years before Lady Luck showered riches on Clarence Berry, the "luckiest man in the Klondike" didn't have enough money to pay his room rent. Caught in the panic of 1893, he was broke. He couldn't ask his sweetheart, Ethel Bush, to marry him and saw no particular prospect of ever being able to do so.

In the Fresno Valley of California, where Berry raised fruit, he seemed destined to a lifetime of hard, plodding work for a bare living. So when he heard of riches to be dug out of the earth in the North, he decided to try for the "gold ring."

That he succeeded in his quest is attested to by the Gold Room at the University of Alaska's museum in Fairbanks, built with money from a grant provided by the Berry Holding Co. of Fresno. It's a "belated gesture by family members in recognition of the part that the frozen frontier and mining industry has played in our fortunes," said company representative C.J. Bennett.

They wanted the room to hold rocker boxes, gold scales and other early day mining equipment, as well as gold. Gold like the $130,000 (more than $4 million today) worth of nuggets Berry brought "outside," when the historic gold ships Portland and Excelsior landed with news of the gold strikes that electrified the nation and started the gold rush of 1898.

Berry had to borrow around $50 for the trip north in 1894. He spent $5 to reach Juneau, where he mingled with other men on their way to the gold fields. Berry, a giant of a man with the biceps of a blacksmith, joined a party of 40 attempting to make it over the Chilkoot Pass.

His two big arms, sturdy legs and courage to spare brought him through, although 37 of the original party turned back when storms destroyed their outfits. Borrowing bacon and other supplies, Berry and two others pushed on, eventually arriving at Fortymile with little more than the clothes on their backs.

Berry didn't find riches at first, but he did find work at $100 a month and soon secured a claim. His prospects looked bright enough so he went back to California the following year to marry his Ethel.

Their honeymoon included Berry strapping his bride to a sled and pulling her over the mountains. Her trousseau, specially made for the trip, consisted of heavy woolen underwear, knitted wool stockings, flannels and furs.

It took them three months to travel from Juneau to Fortymile, a distance of about 900 miles, traveling 10 to 12 miles a day by dog team, which they picked up at Dyea.

Berry built a log home for his bride, with holes for doors and windows and no floor. Ethel had a little sheet iron stove, with holes on top, and a drum for baking. But she endured the hardships without complaining, because she hoped for gold at the end of the rainbow.

Those hopes seemed dim at first, for the claims at Fortymile yielded no gold. To make ends meet, Berry took a job tending bar at Bill McPhee's saloon. He was in the bar the day George Carmack came rushing in to tell of striking it rich in the Klondike.

Berry staked a claim on Forty above Bonanza Creek and later traded a half interest in that claim for half of Anton Stander's claim on Eldorado Creek.

Night after night, he and Anton burned the frozen ground. Day after day they shoveled up what they had thawed. In October 1896, heartening news came from Bonanza on Twenty-one above. Louis Rhodes had reached bedrock, apparently the first to do so in the Klondike. At the bottom of his shaft was gravel studded with glittering gold.

In early November, Berry and Stander reached bedrock, too, and soon realized they were working the richest ground either had ever seen. By Christmas, Clarence and Ethel were showing visitors three preserve jars, each of which held gold washed from a single pan (two shovels full) of bedrock gravel.

Gold was everywhere. When Ethel needed pocket money, she just walked to the dump and smashed frozen clumps of dirt apart to find nuggets. She picked up nuggets on her walks as aimlessly as others picked flowers. When it came time to go "outside," she'd collected $10,000 worth (about $311,000 today).

After traveling Outside and sharing their news of striking it rich in the Klondike, the Berrys traveled back to their gold-mining operation in the summer of 1898. They then struck it rich again on Ester Creek in the Fairbanks region in the early 1900s. 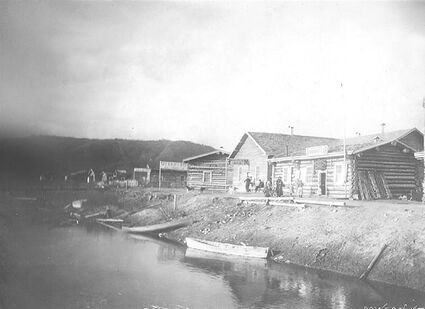 While bartending at Fortymile, seen here, Clarence Berry heard firsthand from George Washington Carmack about the riches found in the Klondike region.

The Berrys invested their new found wealth in California oil fields after they left Alaska, and with the founding the Berry Holding Co. and various other enterprises, they made another fortune. Clarence died in 1930; his brother, Henry, at one time the owner of the Oakland Seals and Los Angeles Angels, died in 1929.

The Berry companies are still in business, producing from the original properties discovered and developed by Clarence and Henry, and carried on by other family members.