Warm memories of cooking for the crew 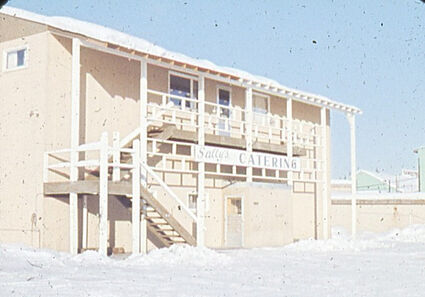 Mercer Construction rented apartments in this building in Fairbanks in 1974.

Not many 18-year-old girls that I know would take on the job of being "camp cook" for five construction guys. I don't know what gave me the idea I could do it. It just happened – the job fell into my lap.

In 1974 my husband Gary worked for Mercer Construction and they had just finished a big job in King Salmon. The next job was remodeling bathrooms at Ft. Wainwright Army base and, after that, they were to remodel kitchens in the family quarters on Eielson Air Force base. We all moved up to Fairbanks from Anchorage in early February. Most of the same guys that had worked together in King Salmon made up the Fairbanks crew.

Jerry Mercer, the boss, rented two furnished second floor apartments in a building off Airport Way. Gary and I shared the larger apartment with Jerry, while the other three guys shared the one next door.

That first morning everyone gathered in our apartment for coffee. When they all left for work, not to return until evening, I spent the morning unpacking, organizing and thinking about the situation. Should I cook for Gary and me, and the boss cook his own dinner when we'd all be using the same kitchen? But, it really didn't matter, as there was no food in the house.

Safeway was nearby, across the four-lane highway. As the guys had taken all the vehicles to work, I was afoot. I bought all the basics and whatever else I thought was needed and had never spent that much in one trip to the store before – over $70! It was a challenge to get the two full carts home, pushing and pulling them across the parking lot which was full of ice, snow berms and dips. The highway itself was smooth to cross, but I could only manage one cart at a time. Then I continued on to the apartment in a relay fashion, with the wheels jarring to a stop every few feet in a dip or a bump. The whole expedition took over two hours, including the time it took to drag the empty carts back to Safeway.

After unloading the bags and putting everything away, I cooked a dinner. I have no idea now what the menu was, but when everyone came home from work they seemed to like it. Jerry was impressed that I had gone to the store and paid me back for the groceries. During the King Salmon job, he had paid for the crew's meals at the restaurant since no kitchen was available.

That night there was discussion about what would work for future meal plans. Figuring since I had to cook for Gary and the boss was living with us, I could probably just increase amounts and cook for everyone. I suggested keeping track of how much money was spent on food and at the end of the month, divide it up among the guys, making a bill for each.

Besides preparing things like fried chicken, spaghetti, lasagna and moose roast, I cooked my first turkey with dressing and my first Cornish game hens. The cookbook we had received as a wedding gift got a real workout. The night moose roast was on the menu, everyone gathered around the table only to discover it was still raw in the middle. They found something to do for another hour while it finished cooking. Dad and Mom had cooked lots of moose roast while I was growing up, but I never paid much attention to the timing.

Another two guys joined the crew for a while and one of them had a wife. They rented a downstairs apartment. The three bachelors then had a choice of where they wanted to go for dinner, but they showed up at our table most of the time. One day the wife made some bread the guys raved about. When I asked, she was willing to show me how and that was my first introduction to yeast breads. Further experimentation produced some cinnamon rolls that were a big hit.

Breakfast, too, was something else I always cooked, but some of the guys never ate any, and others ate depending on what was offered. Bruce said no thanks on the mornings we ate what he called the "kitchen sink", a type of stovetop quiche learned from my mother-in-law. I also learned how to make two pots of perked coffee every morning, but never drank the stuff myself.

When the crew got their monthly paychecks, Jerry also had one for me for $50 for cooking. He certainly got his money's worth between the cooking and the dishwashing. There was no dishwasher and since the guys were so tired from ten-hour days of physical labor, that chore was left to me.

Looking back, I find it hard to believe that the guys put up with my efforts. If we tried this again with the same crew I'm absolutely certain they would notice a difference in my skills, but my early experience as "camp cook" was only for a few months and I'm happy to report they all survived.