By Michelle Tabler
For Senior Voice 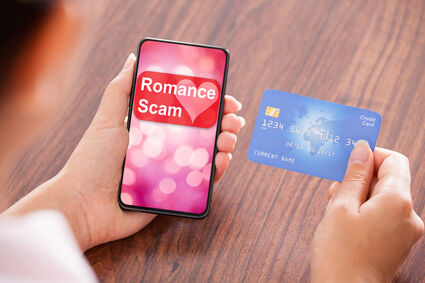 Over the past two years, the total reported losses for this type of fraud was higher than any other scam. And that's probably the tip of the iceberg.

Romance Scams are big business for criminals as millions of people are using online dating sites. In 2019 alone, the Federal Trade Commission estimates $201 million was lost to romance scams, up almost 40% from 2018. In fact, over the past two years, the total reported losses for this type of fraud was higher than any other scam. And really, that's probably the tip of the iceberg as many people who fall victim to this scam are too embarrassed to tell anyone and may be unaware where to report the fraud.

Reportedly, age does matter as seniors, both male and female, lose larger amounts of money in scams. According to the FTC: "Romance scammers prey on consumers who are looking for love, converting what feels like a budding relationship into an ask for money to help the scammer get out of some manufactured crisis." ( https://www.ftc.gov/ )

How do romance scams work?

Scammers hijack photos and information from online sources (which is a second type of scam – identity theft) and create a fake profile. They claim to be local to the victim's hometown but cannot meet in person because they are temporarily working overseas on a project or they are in the military and deployed. They may allude to working on a construction project overseas or on a business venture.

The scammer's intention is to establish a romantic relationship as quickly as possible and to gain the victim's trust. The relationship escalates quickly with talk of love and marriage. They send love notes and even gifts. They spend hours talking to their victims on the phone and emailing them love letters.

And then comes the "ask" ... for money. They want to arrange to visit, but their funds aren't available; they've run into an emergency overseas but their funds are tied up in their current project; or, they or a family member has a medical emergency. Each time, they promise reimbursement as soon as their funds come through. It should also be a big red flag if the person promises to meet in person but then there's always an excuse why they cannot.

In one case, a victim contacted me and told me she had sent tens of thousands of dollars to her "fiancé" (who she'd never met in person) who convinced her he was building their dream home. He repeatedly called her about cost overruns and unexpected expenses and she kept sending money. Even though she was becoming suspicious, she had already "invested" so much money that she couldn't bring herself to believe that this could be fraud.

In another case, a woman had sent her "boyfriend" money for a plane ticket to visit her (which he was going to reimburse when he arrived back in the States). She took the day off from work, got all dressed up and drove to the airport to meet the man she would marry. Of course, he never showed up because he never existed. So, in both cases the victims not only experienced the destruction of what they thought was a serious relationship, but they also lost their money.

What can you do to avoid becoming a victim?

First, be careful what you share on social media and dating sites. Scammers can use those details to target your feelings. Next, research the "person" you are conversing with: enter their profile photo into a reverse image search and see if other profiles using the same photo come up.

Additionally, enter the text from the profile into Google and see if the same text is being used elsewhere. Does this person have profiles set up on Facebook or LinkedIn or other social media sites?

Third, have the person send a selfie holding that day's newspaper and make sure the photo matches up to the profile.

Never send money for whatever reason is given. Wiring money or buying pre-paid cards is the same as sending cash and you'll never get it back. And, never provide credit card or bank account numbers or any personal identifying information such as your Social Security number to anyone.

Social media and online dating sites have made meeting people easier, especially over this past year. Just be cautious, do your research, go slowly, and don't isolate from your friends and family.

Michelle Tabler is the former Regional Manager for the Alaska Better Business Bureau and currently volunteers with the Alaska Fraud Watch Network, as part of AARP Alaska.