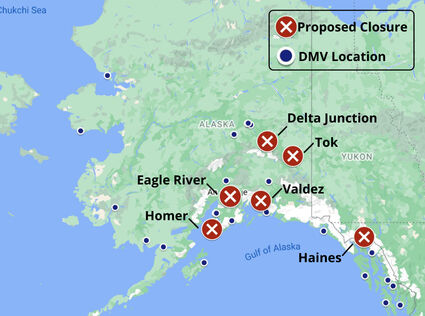 Closures of local DMV offices could force some Alaskans to drive hundreds of miles to renew driver's licenses.

Budget proposals are always debated and altered by the state legislature, meaning the proposed DMV closures - mostly located in rural communities - could be nixed in the final FY2022 budget.

Nevertheless, Peter Zuyus, founder of senior political advocacy group Seniors of Alaska, worries DMV closures in isolated areas will force Alaska's oldest citizens into hardship when renewing driver's licenses. State law requires Alaskans age 68 and older to renew their license in person every eight years, rather than opting for an online renewal. In a point of view letter distributed in December to media, seniors, legislators and other state government leaders, Zuyus implores the Department of Administration (DOA), the overseer of all state DMVs, to reconsider the proposed closure of the six DMV locations.

"DMV closures hurt all Alaskans and seniors, especially those over 68 who are being singled out by denying them online DMV access while requiring them to travel hundreds of miles to simply get a driver's license," Zuyus wrote.

Zuyus said one trip to the DMV for seniors in isolated areas could total up to $500 in extra transportation costs per DMV visit, depending on the distance between the location closure and the next-closest DMV.

In one of the most extreme examples, if the closures are approved, Tok and surrounding area residents would need to travel to the next closest DMV located in Fairbanks, since the Delta Junction location is also proposed to close. With a distance of 204 miles each way, the total time spent driving to the closest DMV would take nearly seven hours of driving in one day. If seniors are unable to drive long distances without taking breaks, the cost of an overnight stay in a hotel could be added to the total expense, Zuyus said.

Closure of the Haines DMV could require residents to take the ferry to the Skagway DMV, the next closest option. However, ferries from Haines to Skagway or Haines to Juneau (and vice versa) currently only run on Sundays, Tuesdays and Fridays.

the returning ferry, they must wait two to three days to return home, incurring exorbitant expenses for lodging and food during their accidental vacation.

If Haines residents decide to proactively not miss the ferry, they can decide to travel to Juneau for two days - a purposeful vacation - by departing Haines at 4 p.m. Sunday afternoon, visiting the Juneau DMV on Monday and returning to Haines via ferry Tuesday at 11 a.m.

In an interview with Senior Voice, Zuyus asked whether other government cost saving options are there, aside from subjecting seniors to undue stress.

"This is on behalf of seniors, and they're the ones that are going to be affected the most," said Zuyus. "Are there ways to do it without closing the offices? Yes. Have those opportunities been explored? Apparently not."

But rather than completely close all six DMV locations, Tshibaka's official recommendation includes a public-private partnership that would reduce costs for the state while improving service and economic growth in each impacted community, she said.

Locations run by business partners already include 907 Tags & Titles in Anchorage and Nome DMV in Nome, the sole DMV in the Nome area.

The six locations in question were partially chosen because there was already interest from local business partners in engaging in a public private partnership with the state, Tshibaka said.

Paula Vrana, Deputy Director of the Dept. of Administration and overseer of state DMVs, said the six locations were chosen for their geographic significance.

"One of the primary drivers for the recommendations for these offices was the fact that they are on the road system or the ferry system. That was really one of the most important things we looked at," said Vrana.

The DOA has been streamlining DMV services over the years through digitization. According to Commissioner Tshibaka, there are only a handful of reasons citizens visit the DMV in person, including obtaining an original driver's license and taking a knowledge test to obtain an Alaska driver's license.

"Other things on the list are your second driver's license renewal, or by statute, if you're a senior citizen, then you have to go and renew your driver's license once every 8 years," she said. "So what that means is, by statute, we have a situation where you have to go into the DMV once a decade, at this point, because everything else has been automated or can be done by phone or mail."

In the upcoming legislative session, Commissioner Tshibaka and other DOA staff will be attending legislative committee hearings to clarify the proposed transition of the six DMV locations from public to public private partnerships.

While Commissioner Tshibaka is confident the plan to privatize, rather than completely close, the six DMV locations scattered across small Alaskan communities will work without service interruption, the budget proposal does not address what will happen for impacted seniors if the DMV closures are finalized and no solution is put in place, leaving a lapse in service.

For seniors, threats to essential services, such as Senior Benefits or the Alaska Pioneer Homes, has been draining over the years, Zuyus said. These instances have fueled his passion for defending others at his fellow "tender" age, he said.

"We've seen programs be quietly dismantled," Zuyus said. "For example, 'We didn't hatchet your Senior Benefits program, oh, but by the way, we increased the criteria to be a member of it.' It doesn't happen with intentional harm. I think people in certain positions of the government think, 'Okay, we'll do this, this and that.'"

Zuyus said he has contacted several state legislators who have promised to advocate for seniors in relation to the proposed DMV closures and said he has had good luck garnering support from both sides of the political aisle.