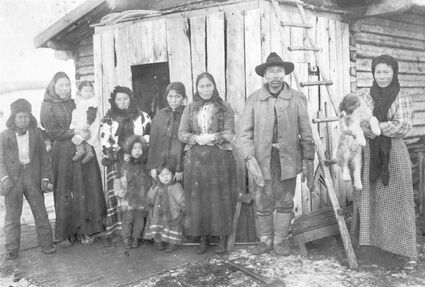 John Minook, shown here with his family in Rampart, told the miners of John Bremner's murder and accompanied them to capture the culprits. Minook later made a discovery of gold along the Yukon that started the boomtown of Rampart.

In the Koyukuk country, two rivers and a lake are named after a grizzled old Scottish prospector who explored the Copper River Valley. Not much is known of John Bremner's life before he arrived in the North Country, but his death triggered a very exciting chapter in Alaska's history. The hijacking of a Yukon River steamer, a wild chase on the Koyukuk, a miners' trial and frontier justice for Bremner's murderer make a story that could have been written by Rex Beach or Jack London.

His stay at Taral – near Chitina – during the 1880s is a saga of hardships and privation. By spring he was tightening his belt one notch every other day. He was "a picture of wretchedness and destitution," wrote Lt. Henry Allen, the next white man up the Copper River.

Allen was on an exploring trip that took him to the Tanana, Koyukuk and Yukon rivers – one of the most important reconnaissance voyages ever undertaken in Alaska. Bremner was easily persuaded to go along, since his prospecting along the Copper had been unsuccessful, and he thought it was a chance to seek greener pastures.

And he thought he'd reached those pastures when the party came to Koyukuk country. That's when he and Peder Johnson, another member of Allen's group, decided to leave the lieutenant's exploration party and go prospecting instead.

One particular tributary of the Koyukuk, which is a tributary of the Yukon River, John liked and talked about so much, that Johnson started calling it "Old John's river." It is marked on present-day maps as "John River."

Both Bremner and Johnson were convinced the gold that had escaped them so far was here, and they spent the summer of 1886 searching for nuggets.

In the spring of 1887, they left Nuklukyet on the Tanana River, where they'd spent the winter, and prospected along the river and its tributaries. They found colors, made rockers and took out enough gold for a grubstake for another year. When they reached the upper river in 1888, John decided to do some more extensive prospecting.

Bremner tried a few promising streams with little success. Then one day, about noon, he reached the mouth of Dolby River and stopped for a bite to eat at a Native fish camp where two women, three or four children, a young man and a shaman were fishing.

The old prospector asked the Natives to share his fried duck and tea. After they'd eaten, Bremner put his grub box in the boat and motioned for the men to shove the boat off shore. Bremner had left his gun in the boat close to the bow.

One of the men grabbed the old man's double-barreled gun and fired. Bremner fell, but was not dead, so the other barrel was fired. Bremner's body rolled into the river and was never found.

Some informants said only one of the men had shot Bremner, but another report said the medicine man finished him off. Whatever the details, Bremner was dead.

A man named John Minook (founder of Rampart), part Russian and part Alaska Native, brought news of the murder to Nuklukyet, where about 60 prospectors were waiting for steamboats coming up from St. Michael with supplies. Their reaction to the news was swift and angry.

Law, as represented by police, sheriffs and courts, had not penetrated this part of Alaska in the 1880s. There was only the law of the miners. The prospectors held a meeting and voted to avenge old John, because they were sure he hadn't provoked the attack. John had always gotten along with Alaska's Native people.

But first the miners had to have a boat. Knowing that steamers from St. Michael soon would be coming upriver, the men went to the mouth of the Koyukuk to wait. In a few days, they saw smoke downriver.

After persuading those on board the river steamer Explorer to disembark, 20 miners and two Alaska Natives, Minook and a man named Pitka who'd been talked into going along as guides and interpreters, trooped onboard.

The Explorer steamed away with men who had greased their faces, hands and necks with a mixture of lard and tar as protection against mosquitoes. They made quite a fearsome spectacle with Gordon Bettles as captain, Bill Moore and Jim Bender next in command, and Hank Wright as boss of all men on deck.

Soon they turned into the Koyukuk, making the Explorer the first steamboat to navigate that river, and made their way to the mouth of the Dolby. There the miners saw a cache of drying fish, some of Bremner's tools and the old prospector's boat, all torn up. Natives fishing along the bank told the miners that the suspects had headed upstream.

The miners finally captured the two men and held a miners' trial. The young man confessed – saying he wanted Bremner's gun, blanket and tobacco – and was hung. It later was reported that after the medicine man returned to his village, the young Native man's family tried to kill him. They believed he had instigated the attack because he and other shamans foresaw the whites overtaking Native country and wanted to stop that from happening. An intertribal feud then went on for years between the families of the two men, which resulted in several more deaths.

And although Bremner died without finding the mother lode of gold that had beckoned him, he did not sink into anonymity as befell so many unsuccessful prospectors. Bremner River, John River and Old John Lake forever will remind us of old John Bremner.