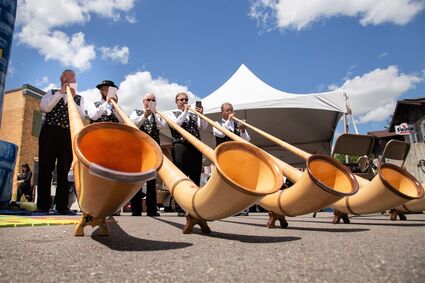 Women chatting in Greek stroll by signs that identify the Spartan Gas Station and Alexander the Great Apartments. They pass restaurants where diners are feasting on pickled octopus, squid salad and gyro sandwiches. Nearby, a man wearing a diving suit emerges from a river and clambers into a boat, clutching a sponge he dredged up from the bottom.

At this time of limited travel, it may be impossible to visit other countries that are on your bucket list. However, that doesn't mean you can't enjoy their customs, culture and cuisine.

A visit to Tarpon Springs, Florida can replicate a trip to Greece, where sponges have been used since the times of Homer and Plato. When those multicellular organisms were found beneath Florida's waters in the late 19th century, an influx of Greek immigrants came to dive for them.

While the demand for natural squeegees shrank, a pocket of the industry hung on in the town. The main draw today is the lore of a community which resembles a small corner of Greece.

Other towns and neighborhoods throughout the United States capture the essence of a variety of nations. Here's an introduction to a small sampling, and an internet search can help you discover more, including those that may be within an easy commute of where you live.

Some visitors to Miami stroll into tabacaleras to watch vendors meticulously hand-rolling cigars. Others check out markets where unusual body parts of pigs and other animals are sold. Not far away, gray-haired men and women loudly slap dominoes onto tables, seemingly interested more in who can produce the loudest sound than how the game turns out.

Welcome to Calle Ocho (Eight Street) in the neighborhood known as Little Havana. Settled by an influx of Cubans fleeing after Fidel Castro came to power, the area greets visitors with sights, sounds and scents identical to those encountered in the island-country.

Cuba isn't the only Caribbean island with a foothold in Miami. In the Little Haiti enclave women in colorful print dresses gather at markets to buy plantain, salt pork and other favorite foods. Shops sell kremas mapou, a blend of milk, egg yolk, cane sugar and light alcohol, and flaky dough pockets brimming with meat, fish and flavor.

Tiny botanicas offer medicinal herbs, incense and other supplies for voodoo ceremonies. It's possible to find dolls and pins for casting spells intended to bring happiness to friends, and grief to others.

Reminders of European countries also are scattered about ours. Immigrants from Germany are said to have ended up in Hermann, Missouri, because its steep, rugged terrain reminded them of the Rhine Valley. The vineyards they planted have won gold medals in world competitions. Today, it's the old-world charm of the town that is its major appeal. Homes from the 1880s hug downtown sidewalks in traditional German style, and more than 150 buildings are listed on the National Register of Historic Places. Guided tours of the Deutschheim Historic Site provide an introduction to the daily life and traditions of the German settlers in the mid-18th century. Typical food, music and dancing are recalled at Oktoberfest and other festivals throughout the year.

Memories of the founders of New Glarus, and of their namesake canton in Switzerland, abound in that Wisconsin town. In 1845, families fleeing poverty survived a four-month journey and settled in an untamed wilderness area where Native Americans had lived for centuries.

Architecture, art and other vestiges of their homeland abound. Swiss-style chalets adorned by flower boxes set the scene. Folk art, museums and celebrations add to the feeling.

Dire economic conditions also prompted Dutch Calvinists to flee the Netherlands and settle in Holland, Michigan. Dutch architecture, delicacies and festivals are among features that create a charming environment. The 12-story-tall De Zwaan Windmill, one of over 9,000 such structures that once graced the Netherlands landscape, was dismantled and reassembled on its present site, where it grinds grain into flour which may be purchased. It's surrounded by manicured gardens, canals and dikes. Tulips are everywhere, and serve as the main attraction of the annual Tulip Time Festival.

More than a half-million Iranian-Americans and their descendants live in Los Angeles, the largest concentration outside their country of origin. That accounts for the city being referred to as Tehrangeles, a blending of its name with Tehran. Hints of the pervading culture are centered

around the intersection of Westwood Boulevard and Wilkins Avenue at eateries like the Shamshiri Grill and Farsi Cafe. 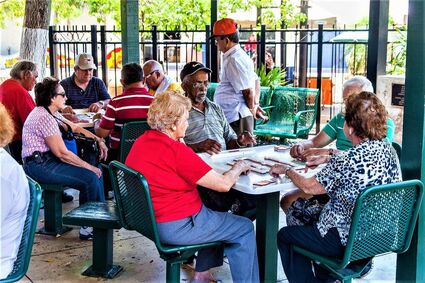 An all-in-one experience awaits visitors to Queens, New York. That borough is the most ethnically diverse urban area in the world. Over half of its residents were born outside of the United States. They came from more than 120 countries and speak over 135 languages. The Tower of Babel had nothing on this enclave.

This is but a brief sample of destinations around the United States where people may enjoy attractions and appeals of other countries and cultures. There are many more, including picturesque Danneborg, Nebraska, with its romantic-style homes and Danish festivals; Mineral Point, Wisconsin, where restored homes built in the 1830s by miners from Cornwall, England are among reminders of those early settlers; and the Asiatown neighborhood of Houston, Texas, with a melting pot of architecture, shops, restaurants and experiences reminiscent of Vietnam, Korea, Pakistan, Bangladesh and other Asian countries.