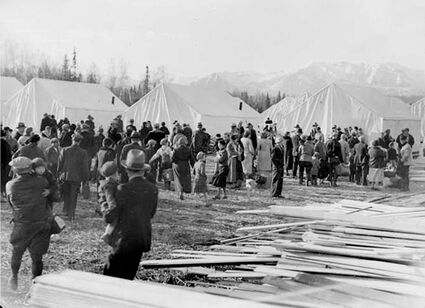 Early settlers of the Matanuska Valley Colony found tents awaiting their arrival in May 1935. President Franklin Delano Roosevelt approved a project known as the Matanuska Valley Colony in his New Deal in 1935. The idea of moving more than 200 families from Midwestern states like Minnesota, Wisconsin and Michigan to a community in the wilderness north of Anchorage stirred imaginations across the country.

Long before the Matanuska Valley became one of the fastest-growing communities in the nation, Russians tried to establish agricultural settlements on its fertile soil. They taught the Dena'ina how to grow crops like potatoes, carrots, radishes and turnips.

In 1844, Russians founded settlements at Matanuska and Knik, as well as Kachemak, Kasilof and Kenai. Russian Alexander Herzen wrote in 1859:

"A handful of Cossacks and a few hundred homeless mujiks (peasants) crossed oceans of ice at their own risk, and wherever timeworn groups of them settled in the cold steppes forsaken by nature, the places would begin to teem with life, the fields would sprout forth with grain and herds...."

The USDA established an experimental station one mile northwest of the town of Matanuska in 1917 and appointed Frederick Rader as its first agent. He oversaw the clearing of four acres of land, planting two with oats. Rader ran the station until Milton D. Snodgrass took over in 1923. Snodgrass, who stayed with the project until 1929, continued the effort to attract more farmers and ranchers to the area.

Col. Otto F. Ohlson, general manager of the Alaska Railroad since 1928, also had been trying to entice farmers to the Matanuska Valley in an effort to spur railbelt settlement toward Palmer, which had been founded in 1916 as a stop on the branch of railroad that went to the Chickaloon coal fields. But despite the area's fertile valleys and abundant sources of fresh water, settlers didn't stream into the area. By 1929, only about 4,000 acres were under cultivation.

Ironically, it took the Great Depression of the 1930s to jump-start the population growth of the valley. In an effort to take people away from rural districts, where poverty had prevailed long before the Depression, and move them into areas where they might lead more productive lives, the Roosevelt administration designed many resettlement projects.

President Franklin Delano Roosevelt approved a project known as the Matanuska Valley Colony in his New Deal in 1935. And the idea of moving more than 200 families from Midwestern states like Minnesota, Wisconsin and Michigan to a community in the wilderness north of Anchorage stirred imaginations across the country. The federal government, which wanted to increase Alaska's population for defense purposes as well as help farmers in depressed areas, had high expectations for the project.

By mid-1935, about 176 families had heeded the call from Washington for real "dirt farmers" to "go west" and subdue the untamed wilderness in the Matanuska Valley. The colonists worked hard to create a settlement and plant fields with financial help from the U.S. government.

The government gave each family a $3,000 allotment (about $57,000 today). A commissary dispensed the regular monthly allowance for provisions, with clothing and household articles issued from a warehouse. Each purchase was recorded with the expectation that the colonists would repay the governemt within 30 years with interest.

Rumors spread that it cost around $125,000 to bring each colonist to the valley. With taxpayers still reeling from the devastation of the Great Depression, it's little wonder that many of them questioned the wisdom of establishing an agricultural community in remote Alaska. But Anthony J. Dimond, Delegate to Congress at the time, stood firmly behind the colonization of the Valley.

"The Matanuska Valley farm settlement plan is both humane and economically sound," he said. "The fact is, if it be a fact, that mistakes made in the setting up of the colony give no reason to condemn it. The settlers are being helped to get into a position to help themselves and this is the best sort of aid."

As a result of the federal government's agricultural experiment, Alaskans have been enjoying fresh produce and milk ever since it began. Today there are a couple hundred farms in the Matanuska Valley and the farmer's markets that sprout up every summer from Alaska's "bread basket" are always a welcome sight.

This column features tidbits found among the writings of the late Alaska historian, Phyllis Downing Carlson. Her niece, Laurel Downing Bill, has turned many of Carlson's stories – as well as stories from her own research – into a series of books titled "Aunt Phil's Trunk." Volumes One through Five, are available at bookstores and gift shops throughout Alaska, as well as online at http://www.auntphilstrunk.com and Amazon.com.