Sorting and stirring up memories 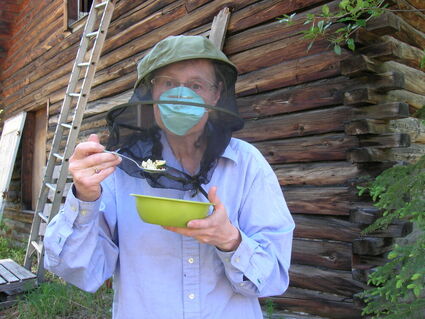 While going through boxes of family stuff in early June 2015, one of my sisters found this letter that I'd written to my second grade teacher. The fat, three-quarter-inch tall, penciled letters and misspelled words ('collass' instead of 'class') plainly showed I was happy with my life in Anchorage. But my dad accepted the position of plant foreman at Copper Valley Electric, so our family moved to Glennallen in January 1963.

It wouldn't have been an easy move. Who moves to interior Alaska when the temperatures hover around 40 below? And back then, the drive from Anchorage to Glennallen took five hours rather than the four it does now. We four kids were too young to be much help – my eight-month-old baby brother was the youngest and I was the oldest at seven years.

But it proved to be a life-changing move for the entire family. We kids attended the Glennallen schools and all graduated from Glennallen High School. Dad and Mom lived and worked there a total of 25 years before retiring to Homer.

For the first three and a half years, we lived in Copper Valley Electric Association housing located only a couple hundred feet from the power plant. Then Dad and Mom bought 17 acres on the outskirts of town. The property included a large old log house, where the floor boards were rippled and buckled from frost heaves and the roof needed repair even in 1966.

Dad replaced the roof and turned the old house into storage – very necessary for a family of six squeezed into a 10-by-60 foot trailer house with an additional "expando" living room. Perhaps because of my parents living through the Great Depression and living a homestead-type lifestyle, nothing was ever thrown away – just put in storage for its practical or sentimental value.

Growing up, we kids were not allowed in the "old house" as we called it. It was the only thing off limits on the whole property, mostly because of the safety factor – rotten floor boards, sagging rafters and rusty nails. My youngest sister remembers the time she and our brother climbed the attached wooden exterior ladder to the loft/attic and played in the homegrown oats Dad had stored there. They both got spankings – something rare enough to be quite memorable.

Fifty years later, we three sisters had scheduled a week long work session with the energetic goal of cleaning out the "old house". The roof line sagged, the walls were twisted and leaning, and the floor boards were in such disarray we had to watch every step.

Ten years earlier, the main door had become unusable – jammed shut by the weight of the upper wall. So we entered and exited through a window opening from which the glass had been removed. The remaining windows all had some broken panes. Anyone attempting to walk on the rafters in the attic would have been foolish.

We worked very hard all week. Everything in the "old house" was covered with 50 years of dust as well as plenty of mouse poop, bits and pieces of insulation, and broken glass. Most of the boxes had no lids, so the debris had filtered down through the contents.

Several boxfuls of stuff had mildewed from the bottom up because of contact with the bare ground. Judging from many piles of poop throughout, some kind of critter had sheltered there in the past two years. Perhaps a lynx.

Many in these circumstances might solve the problem with a big bonfire or haul everything away by the truck load to the dump. But with the librarian, historian and sentimental bents we three sisters all have, that was not even a consideration.

When we called our brother to ask if he wanted any of his old hockey gear, knowing how rickety the building was, he advised us to run for the exit window if we felt an earthquake coming. Too bad we didn't get any video footage of us middle aged, grey haired sisters climbing over a 30-inch window ledge several times a day, dressed for hazardous work and mosquito protection. In defense against mosquitos, we wore long sleeves even on the 80-degree days and I frequently wore a head net. Always gloves and many times dust masks.

Because the mosquitos were so ferocious, it was impossible to do any sorting in the "old house". One sister clipped the nearby willow bushes enough so that on the nice days we could spread things outside on a couple tables and on the ground. On the rainy or windy days, we wheelbarrowed the boxes in to the nearby modern garage for sorting.

This was not our first work session at the old home place but was certainly the longest. The process included excavating, emptying out debris, identifying, sorting and determining whether things would be divided, thrown away, saved for a museum, or paperwork to be taken care of at a future work session.

As we each worked our way through a box, we'd tell each other when we found something interesting – which meant there was constant conversation. Tears and laughter (sometimes hysterical) were part of our days as memories bombarded us from all angles. I had no internet, no TV, and very little radio the whole week and felt like I was living in my past. 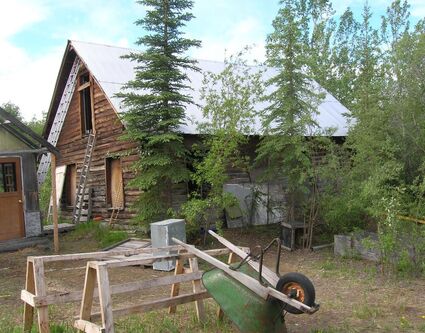 The Old House on the Clayton homeplace in Glennallen.

Many treasures were unearthed, including two unfinished quilt tops our dad's mother made, which had not seen the light of day since 1942. We never knew this grandmother. Numerous historical documents and photos as well as household treasures turned up. Vintage clothing of all sizes, books, magazines, personal letters, toys, old schoolwork, furniture, two toilets, two sinks, a glass windshield for some vehicle, tires, animal hides, building supplies, a boat motor, and even an airplane engine were all part of the mix.

We found nothing of great monetary value, but each came away with historical and sentimental items like my letter to my second grade teacher, Mrs. Ridener. According to that letter, I didn't want to move to Glennallen. But hindsight showed it was a great place to grow up. Memories from the 1960s and 1970s, stirred up during our 2015 work session, reinforced that mindset.