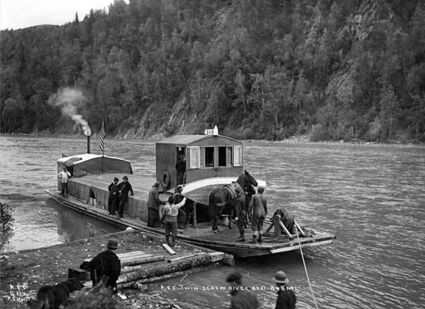 During the stampede for gold, some horses were familiar with trotting onto a large riverboat, like the one in this photo. But they were not used to stepping into small boats with outboard motors as described in this story from 1936.

Hair-raising experiences, hardships and back-breaking toil were common to the lives of those who struggled to take from Nature her wealth of precious minerals. Few emerged victorious, thousands failed. But the lure of gold continued to draw prospectors on to new fields in the 1930s.

Prospectors did not work alone. Many relied on horses to help them mine claims along the rivers, beaches and mountains of the North, according to an article written by F.W. Gabler titled "Horse Power for Unuk Gold," which appeared in the January 1937 issue of The Alaska Sportsman. And when Thomas McQuillan found his much-sought pay dirt in the Unuk River Valley in 1936, he knew he would need to get horses to transport equipment and supplies to mine it.

He and the Unuk River Placer Gold Co. Inc. faced a major obstacle, however. The mining property was 48 miles up the Unuk River, which flows from British Columbia into Southeastern Alaska – 24 miles was accessible only by riverboat. Who ever heard of transporting horses up a swift and treacherous river in a small boat?

One of McQuillan's associates, Walter C. Blanton, was charged with purchasing two horses from a packer named Jack Rainey. Blanton knew just which horses to buy because he had experience with them crossing glaciers and hazardous trails while working for another mining concern.

Shortly after buying the horses, McQuillan changed his mind and hired new-fangled airplanes to take supplies and equipment to the mining camp. He sold the horses to Premier Gold Mining Co., which wanted them delivered to the boundary of its property, a few miles farther up the trail from McQuillan's site.

In late July, McQuillan stood at the mouth of the Unuk and carefully checked his plan. He had to get the horses used to standing in a small boat before he started out on the voyage up river. If they got spooked, they could easily flip the boat and send all men overboard.

McQuillan knew if a man entered the grasp of the silt-laden river, it was only a matter of moments until his clothes, weighted with entering silt, pulled him down to his death.

The prospector spent hours teaching the heavy horses how to get into the lightweight river boat. He carefully led each horse to the side of the boat, slowly lifted one front hoof, then gently placed it over the gunwale and lowered it to the floor of the boat. Then when McQuillan pulled on the halter rope, the horse followed with his other feet and finally grasped the idea.

McQuillan then started the outboard motor to get the horses accustomed to the noise. After many rehearsals, McQuillan felt the steeds were ready for their big adventure. And along with a man named Berg,

a rugged Norwegian from Premier, he started the unusual journey with the horses from the mouth of the Unuk in late July 1936.

The men waded the horses across a slough and then followed a primitive road built around 1900. Soon McQuillan had to teach the horses a new maneuver, because they had to swim across portions of the slough to get to parts of the path.

McQuillan tied a stout line to the halter and took the line across the slough in the riverboat. He then directed the horses by pulling on the rope. He repeated the process several times during the first four-mile day that only got them to Clearwater Creek.

The next day, McQuillan set up the rope and directed the mare, named Old Baldy, across the slough. She hauled herself up on the opposite bank, shook off excess water and then whinnied to her companion. The other horse entered the water and swam across without the aid of the rope.

Several days later the road ran out and it was time for the horses to get into the riverboat. Old Baldy went first, carefully stepping inside the small boat and steadying herself.

All went well at first, although McQuillan couldn't believe he was balancing a boat that drew hardly four inches of water with a horse towering six feet above him in a swirling river.

Suddenly a sweeper sprang up in front of him. In a flash, McQuillan thrust the tiller over in a wild effort to miss the battering ram. The boat rolled as the horse's weight shifted. Water poured over the gunwale.

Then Berg used his massive strength to drive the pike pole into the end of the log and forced the boat over to the other side. The log scraped alongside the boat, and with surprising agility, Old Baldy maneuvered her feet to keep balanced. Then another snag floated into sight. But McQuillan turned to avoid it, and the log swept past. 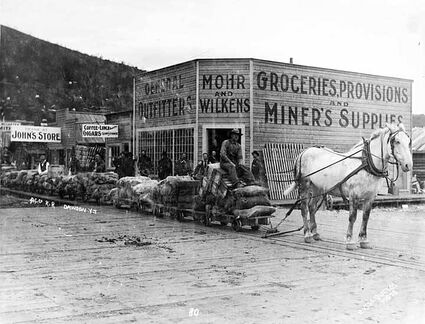 Work horses were worth their weight in gold as evidenced by this fellow pulling a long line of loaded sleds along tracks in Dawson circa 1900.

McQuillan and Berg pulled ashore a bit later and unloaded their supplies and Old Baldy. They returned downriver and repeated the process with the second horse. Once both horses were safe on shore, the group headed out toward their goal.

Days later, as Old Baldy headed onto Premier's property, McQuillan said she stopped, half turned in the trail and issued a loud whinny, as if to say, "It was a grand trip boys! Goodbye," wrote Gabler.

This column features tidbits found among the writings of the late Alaska historian, Phyllis Downing Carlson. Her niece, Laurel Downing Bill, has turned many of Carlson's stories – as well as stories from her own research – into a series of books titled "Aunt Phil's Trunk." Volumes One through Five, which are available at bookstores and gift shops throughout Alaska, as well as online at http://www.auntphilstrunk.com and Amazon.com.