A lifetime of Alaska fishing memories 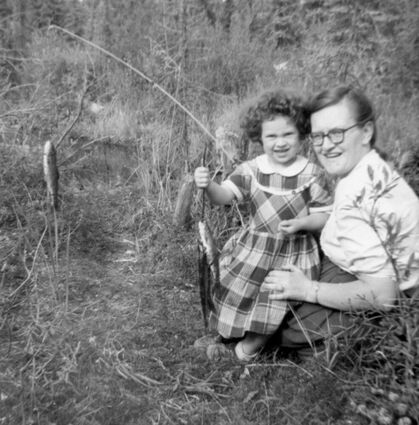 Maraley and mother, Martine Clayton, with grayling caught near the Nabesna Road in 1958.

I don't recall one of my first fishing experiences, but according to a family photo, grayling were caught in a little creek near Twin Lakes, about mile 28 of the Nabesna Road in the summer of 1958. At three years old, I'm sitting with my mother, wearing a huge grin and holding three grayling on a stick. Mom holds a pole with a grayling still attached.

I do remember standing on the bank of the Twentymile River just south of Anchorage on the Seward Highway. Dad stood a few feet out and scooped up eulachon in his dip net. Many whole fish were packed into half-gallon paper milk cartons surrounded with water and frozen. Strangely, I don't remember eating them.

Another time, our family went to Chitina so Dad could dip net salmon out of the Copper River. With the steep, muddy trail down to the mighty river, I thought it was a great adventure. Mom was adamant that it was no place for girls ages seven, five and two and a half. We girls never got a return trip, but we grew up loving fresh salmon.

In May 1973, Gary, my fiancé at that time, took his dad and my brother on a memorable grayling fishing excursion just up the creek from the Moose Creek bridge south of Glennallen. After we married, Gary worked construction in various parts of Alaska and in May 1974 he was finishing a job in the King Salmon area. To celebrate our first anniversary, we trolled for rainbow trout in the Naknek River. We immediately ate his 31-inch beauty and put my 28-inch trout in the freezer for later.

Several years later we returned to Glennallen to live for a short while. During this time, Gary went king salmon fishing almost daily when they were running in the Gulkana River. Although our three-year-old son was too young to go with his papa, he treasures the photo of himself standing in between two frozen kings, both taller than him.

In 1981, with our three children (the youngest being a year old), we spent a wonderful afternoon fishing for grayling at Snowshoe Lake, which is about 45 miles south of Glennallen on the Glenn Highway. This time our son, who had just turned five years old, was delighted every time Papa (Gary) caught one and let him help reel it in.

After enjoying an eye-opening halibut charter out of Valdez, thanks to my dad, Gary bought a 22-foot C-Dory so we could have saltwater fishing adventures. We mostly fished out of Homer, Ninilchik and Seward. Our daughter treasures the experience of catching a 68-pound halibut which weighed more than she did. Several years and much fresh halibut later, we sold the boat. I had tried to be a good sport on these trips, but if I took medication to prevent seasickness, I fell asleep. If I didn't, I ended up leaning over the rail.

Ice fishing for lake trout in Finger Lake in the Mat-Su Valley was also a fun winter family activity. During the 1980s, one year when the wind had blown the snow off the lake and polished the ice until it was glass smooth, we took Grandpa McMichael with us. Being from California, the whole concept was new to him and we didn't think to forewarn him before driving the car out onto the crystal clear ice, which resulted in his frightened panic.

Celebrating the Fourth of July near Cooper Landing several years later, Gary, our son, and I fished the mouth of Quartz Creek where it flows into Kenai Lake. Sitting there in our rubber raft with my two favorite men, the day became even more memorable when I caught the largest fish, a 16-inch Dolly Varden.

The summer of 2000 I went on a three-day raft trip on the Gulkana River with my brother, his family and my dad. The afternoon of the third day, I fished for king salmon for the first time in my life. I was so excited when I felt the nibble that I forgot to set the hook. Mine got away, but my seven-year-old nephew was successful.

That same summer, our first living in Slana, Gary took the four-wheeler out fishing for grayling in the local creeks. Not just once a day, but many times twice a day. I thought he would tire of it after a while, but I was wrong and we had fresh grayling for dinner on a regular basis, something we have greatly missed since our move back to Palmer. 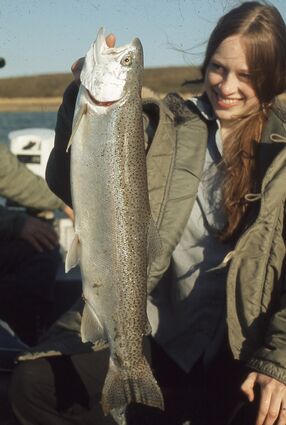 Maraley McMichael with her rainbow trout from the Naknek River, May 1974.

Gary enjoyed taking our kids, relatives, friends, and even a few bed and breakfast guests fishing for grayling during our 12 years in Slana. He did frequently joke with them, though, that he had to either blindfold them before they set out or shoot them when they returned, if he took them to the secret fishing hole down the Nabesna Road. I enjoyed going along on some of those little excursions now and then, to fish in the same area from my childhood – enjoying the moment and making memories for the future.

Many Alaskans have a wonderful variety of great fishing experiences. Mine happen to begin and end with grayling on the Nabesna Road. No matter what yours are, may you have a wonderful summer of fishing or at least revisiting priceless memories.