Alaskans go all out for the Fourth of July

It was no time to celebrate in large crowds the past two years, so Independence Day celebrations across the state were canceled. But they're back now.

In Utqiagvik (formerly Barrow), the midnight sun makes fireworks impossible, so they're saved for New Year's Eve at a time when the sun does not rise until February. While it may sometimes snow on July 4, that doesn't prevent residents from turning out for an array of games from foot races to a contest tossing a line and hook used in seal hunting to a fly over of the North Slope Borough's impressive array of aircraft - a Lear Jet model 31A, Beechcraft King Air 350 and two Bell model 412 helicopters.

Seward gets to have fireworks at its annual July Fourth celebration and features a packed holiday schedule of special events, presentations, contests, and community gatherings.

There's a boat parade on July 3 from 10 to 11p.m., followed by fireworks at midnight launched from the Harbor Uplands, near the Mariners Memorial. You can spot them from all over town, but some favorite viewing spots include the Seward Waterfront Park, Seward Boat Harbor, or on a boat in the bay.

Of course, Seward is known for the grueling Mount Marathon race that draws runners and hikers from all over Alaska, and that's on July 7, but there's another on the Fourth of July. A mini-Mount Marathon race for children from two to six years of age. That'll be something to see.

There's festival booths selling Alaska-made crafts, so be sure to support them after the two-year hiatus in their ability to make a living.

At the beginning of the Inside Passage

Skagway starts the Fourth early with a contest of decorations on homes and storefronts on July 3. Winners receive local gift cards. This year's theme is "Skagway: We Are One - Shgagwéi Ku.oo: Ch'a Tléix'í Yáx Uháan."

This year's Grand Marshals are Si and Sheryl Dennis.

There will be a drop box to help choose parade themes and recognize deserving community members for future Independence Day celebrations.

For ages 12 and up there's hitting accuracy contest with softballs, followed by a Home Run Derby contest, with entrants providing their own softballs and a pitcher.

It's a packed day on Independence Day proper from 7:30 a.m. to 8 p.m. The Skaguay News holds its annual 5K Run-Around (and walk, too) for fun and boasting rights. A classic car display, pie-eating and hot dog-eating contests, mini-golf at the Skagway Mini-Open, a slow bike race, a magic show, barbecues, a tug-of-war, horseshoe tournament, corn hole tournament, chalk festival for kids, and choose a numbered duck for a prize in the Ducky Derby.

Be part of the Guinness Book of World Records' Skagway Egg Toss, deemed the biggest by Guinness.

And for a town with a historic Klondike Gold Rush train, the White Pass & Yukon Route Railway, what could be more appropriate than a spike-driving contest?

It's all-day fun and there's only one cruise ship in town that day, the American Constellation, with 250 on board. This time of year in Skagway, the port is usually full of ships.

Next to Juneau, the small-knit island of Douglas has a homespun Fourth.

For kids there's a bike-decorating contest and sidewalk chalk decorating at the Douglas Library parking lot.

The next day is the main and children's parade, church bells ring out, and the annual Deep Pit Beef Barbecue, and of course a hot dog sale. 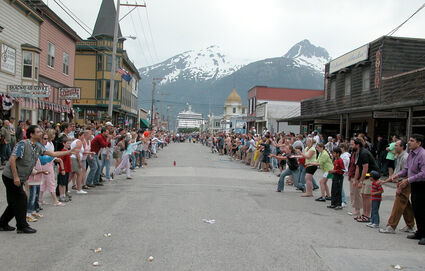 Tiny Tenakee Springs on Chichagof Island's 2021 theme is "Freedom Flings!" At noon there's a parade of local floats, followed by a potluck with ribs and hot dogs provided. Bring your own beer.

On yet another island farther south is Unalaska. The city will have the Graduating Class of 2021 as parade grand marshals.

This is a great gesture for the seniors who missed so much during the pandemic. Its theme is "Party in the USA." So no political parties involved, just a good time for all.

So far they just have a parade with prizes in categories - Best Use of Theme, Judge's Favorite, Best With Animals, Best of Show, and Best of Cars/Trucks/Machinery.Enjoy the holiday and keep close to your heart the Founding Fathers' vision for this land.