Letting go: Every garage sale memento has a story 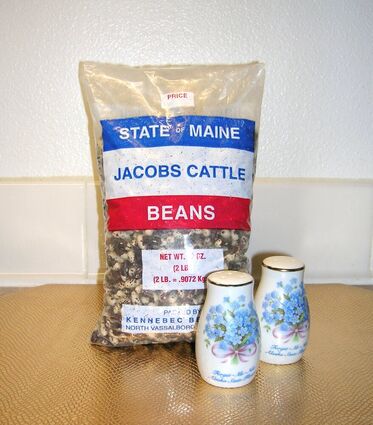 Dried beans and a salt and pepper set bought at a 2010 Slana yard sale.

The garage sale signs were posted on each side of the driveway, so I knew we were expected and welcome, but I still had mixed feelings. An older gentleman in our community of Slana back in the summer of 2010, had sold his home and moved to Tok. His lifetime accumulation of personal belongings needed to be removed from the property.

A Norwegian immigrant, he moved to Alaska in 1966, making his living as a commercial fisherman, a trapper, and a carpenter. He embraced the homesteader lifestyle. Beside the house, he had the usual assortment of out buildings: generator shed, workshop, garage, storage building, outhouse and so forth.

I recognized neighbors and friends as my husband and I drove in and soon met the gentleman's daughter, also an Alaskan, but one who lived 350 miles south. She explained the procedure for the sale, "Half the bedroom is blocked off and not for sale, otherwise, wander around the whole house and take a look."

She also said we were free to poke around in the boxes in the nearby storage building, but that she hadn't been able to access everything, let alone sort through it all, so if we brought an item out that she hadn't yet seen, it might not be for sale.

"Also, nothing is priced," the daughter continued, "That's impossible." She suggested that we create a pile of things were interested in and she would then give a price for the whole lot and go from there.

I had known this homesteader's wife, a lovely woman who had passed away several years earlier, and I was drawn to this sale particularly to pick up something to remember her by. Soon I saw a great assortment of books I couldn't pass over and ended up looking at title by title.

As I slowly made my way through the living room so filled with belongings, a pair of touristy Alaskan Forget-Me-Not salt and pepper shakers caught my eye. Nice and small, I decided they would be my memento, but before I left I wanted to check out the storage building.

Outside in the yard, I consulted with my husband who had found nothing he needed and was ready to leave, but he was also content to visit with neighbors while I walked up to the storage shed. The building he was most interested in, the workshop with all the power tools, was not open to the public.

I found the 15' x 20' foot storage shed full, from floor to ceiling. Shelving three layers high surrounded the perimeter of the room as well as a block of shelving down the center. There was a walkway access, but it was more like a trail with contents from the shelves spilling out everywhere. I didn't even attempt to check out the top shelves. Not long after I began poking around the many layers of boxes and bags, I became overwhelmed and soon walked away with nothing. Although we didn't have a garage sale, these personal belongings could just as easily be my dad and mother's stuff that my three siblings and I had sorted through the previous summer.

We had gathered at three different locations around Alaska and opened boxes, many times looking at things we'd never before seen. We completely cleaned out one house to get ready to rent, but otherwise did not finish our difficult task. And this summer, no one had the time, energy or motivation to continue the project.

At times last summer, sorting through our parents' lifetime of personal belongings seemed like an impossible, monumental task - especially because they grew up during the Great Depression and never threw anything away. But at other times, I was so thrilled to discover a family history treasure. I learned more about my paternal grandmother, who died years before I was born. We found some remnants of her quilt-making in a box that hadn't seen the light of day since 1947 and discovered and read a few of her letters to my dad from the 1940s, both of which gave me a little more insight into this grandmother.

Eventually I decided to view the process as a treasure hunt and was ultimately thankful that we kids still had the opportunity of discovering treasure. I'd heard sad stories of the opposite extreme. Like one where in the process of the parents getting rid of their stuff just so the kids wouldn't have to deal with it, some family heirlooms were lost forever. Or another story where the family suffered loss of treasures due to fire.

While looking for the daughter to ask for a price on my pile of treasures, I noticed the old homesteader observing friends, neighbors and a few strangers sifting through his personal belongings. He wore a pained expression most of the time, but his face broke into a smile when one of his young great-granddaughters asked him a question.

Then a man at the sale, a stranger to me, asked him if a certain unique item had a story behind it. I wasn't the least surprised at the reply in the familiar Norwegian accent, "Everything here has a story to it." That would have been my father's response, too.

As I tried to picture my dad in this same situation, I couldn't. The summer before he died, he told me he had never even been to a garage/yard sale, and I know for certain he and mom never held a sale. In fact, once someone told him a lot of items in his living room should be in a museum. "Why would I want to give my things away to a museum? I enjoy looking at them," had been his reply.

I came home with more than one memento and several useful items that were just too great to pass up at garage sale prices, including a case of 2-pound bags of Jacob's Cattle dried beans. I also came away with a sense of admiration for this gentleman and his daughter, knowing how difficult letting go must have been for both of them. I'm sure most of the other buyers felt the same way.