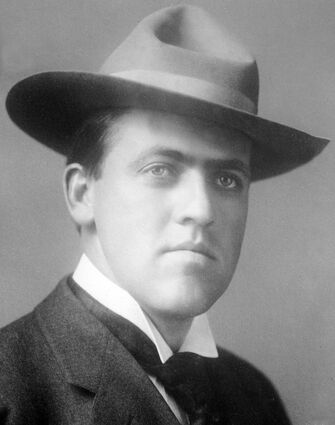 Rex Ellingwood Beach authored 33 novels and hundreds of plays and short stories. His most famous novels, "The Spoilers" and "Pardners," recounted his adventures during the Alaska gold rush era.

As a young man, famous American novelist Rex Ellingwood Beach struck out from Illinois in 1897 in search of his fortune in the gold-filled Klondike. Along with others who had some money and time, he chose to travel the all-water route.

Hopeful prospectors like Beach hopped onboard steamships leaving Seattle and other West Coast ports bound for St. Michael, where they connected with flat-bottom sternwheelers for the 1,500-mile trip up the Yukon River to Dawson.

However, many travelers discovered that the Yukon River boats on which they'd booked passage did not exist and found themselves stranded at St. Michael. Others jumped on boats that started up river too late in the season, got caught in the river's ice and were forced to spend the winter in Rampart or Circle City.

Beach, who'd been studying law in Chicago and working for his brothers when gold fever hit, was one of those who settled in Rampart. He spent the winter of 1897 and spring 1898 in a cabin located about 600 miles from his original destination of Dawson City.

He found work with ex-ranger Bill Joyce, one of the first prospectors on the Yukon. Beach earned $5 a day (about $165 in today's money) and beans working a hand-hewn windlass at Joyce's claim on Little Minook Creek.

The writer later credited Joyce with many of his story ideas. The then-70-year-old prospector often dropped into Beach's tent in the evenings to spin yarns and share tales of adventure.

The young man eventually made his way farther north where the discovery of the precious yellow metal on Anvil Creek had brought thousands of miners to the area that became known as Nome. Almost overnight an isolated stretch of tundra fronting the beach was transformed into a rip-roaring, tent-and-log cabin city of 20,000 prospectors, gamblers, claim jumpers, saloon keepers and prostitutes.

The Nome that greeted Beach was no different than many early day gold camps. There were almost as many con men trying to separate the gold from the miners as there were miners digging for gold.

During the summer of 1900, he witnessed firsthand the bold attempt by "senator maker" Alexander McKenzie, a Republican political boss, and crooked North Dakota federal judge Arthur H. Noyes to steal gold from placer miners in Nome. The pair conspired to put hundreds of claims into a receivership and then proceeded to exploit the claims and freeze out the miners. Their scheme was so successful it took two appeals to the Ninth Circuit Court in San Francisco and two U.S. Marshals to restore order and jail Noyes and his henchmen.

Beach locked this and other Far North experiences into his memory bank, and after returning "Outside," put pen to paper after he heard money could be made by telling gold-rush stories.

"Back in Chicago, I was selling firebrick, lime and cement when I met a Yukon acquaintance who told me he had sold a story of one of his mining experiences for $10," Beach later recounted. "There was an empty desk where we were standing. I snagged a chair and wrote."

One of his most famous novels, "The Spoilers," tells the tale of the conniving Nome judge. He later wrote in his autobiography, "Personal Exposures," that when it came time to write that first novel, "its plot was ready to use. About all I had to do was add a little imagination, flavor with love interest, season to taste and serve."

That 1906 fictional tale, which features two Yukon adventurers who duke it out over a gold claim, a beautiful saloon girl and a crooked gold commissioner, has been put to film five times – in 1914, 1923, 1930, 1942 and 1955 – and helped set the public's mind about both Alaska and the Yukon.

Beach, who died in 1949, went on to write 33 novels – many adapted to the screen – and hundreds of plays and short stories. But "The Spoilers" still ranks at the top of his achievements as he and his novel were honored in 2009 by naming a public pedestrian-bicycle trail after them. Dubbed "Spoilers Run," the trail is near his New York residence in Dobbs Ferry.