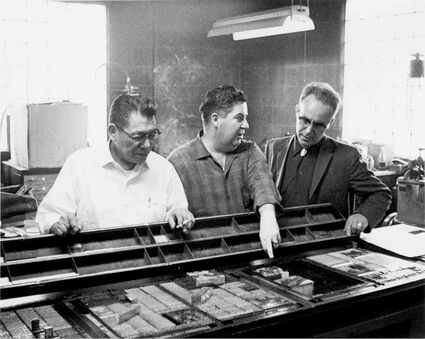 In 1911, near the village of Tikigaq, Howard Rock's shaman grandmother predicted he would become a great man. More than 50 years later, the prophecy came true. Rock, small in stature, did indeed become a giant among men.

Raised in the traditional Eskimo way, Rock learned to hunt with his father and embraced his culture. But he also had a foot in the western world.

Like many Native children of the time, Rock had to leave his village at the age of 15 to continue his education past the eighth grade. He studied at White Mountain Vocational School near Nome, where he became interested in sketching and oil painting.

Rock traveled to Medford, Ore., when he was 22 and served as an apprentice to Belgian artist Max Siemes. He later studied art at the University of Washington.

When World War II erupted, Howard joined the U.S. Army and was sent to North Africa to serve as a radio operator. He returned to Seattle at the end of the war and worked as a jewelry designer for the next several years before returning to Alaska in 1961 for a vacation.

While visiting his family in Point Hope, Rock learned his relatives and friends were worried about a U.S. government plan to detonate a nuclear blast and create a harbor in the Arctic for shipping minerals and other goods from northwest Alaska. Members of the Atomic Energy Commission thought an underwater nuclear explosion at the mouth of Ogotoruk Creek near Cape Thompson was an ideal place to test the peaceful use of atomic power.

"There were attempts to lull us, the people of Noatak, Kivalina and Point Hope," Rock later told author and historian Lael Morgan in an article titled "Tundra Times: A Survival Story," which appeared in the Alicia Patterson Fund Newsletter dated July 15, 1972.

"We were wheedled with rewards of acclaim from science and the peoples of the world if we would agree to go along with 'Project Chariot.'"

But with Rock's help, the people of the region protested and chose to protect their way of life and heritage instead. Eskimo leaders from 20 villages met in the fall of 1961 to discuss strategy. They called the meeting "Inupiat Paitot," which means "The People's Heritage."

Environmental studies began to show that fallout from radiation after test blasts contaminated lichen, which caribou eat, and it was finding its way into humans who consumed the caribou. With opposition growing ever stronger, the AEC backed down and shelved the idea in 1962.

In October that year, the Arctic Slope Native Association asked Rock to start the Tundra Times with Fairbanks journalist Tom Snap. Through the newspaper, the Point Hope Eskimo changed the way many Native people saw themselves by actively encouraging them to have pride and respect for their heritage and cultures – and to fight for them.

"He was the most soft-spoken man," said journalist Tom Richards, who worked at the Tundra Times from 1968 to 1974. "But he had tremendous impact with just a few words."

After taking on the U.S. Atomic Energy Commission to prevent the Arctic atomic test project, Rock used the Tundra Times to fight the federal government on behalf of Aleuts virtually enslaved in the Pribilofs.

Rock, through his newspaper, unified Alaska Natives by "knowing the hearts and minds of the people," Alaskan leaders said.

At a time when there was often disharmony around the state, Rock pushed for the formation of a statewide gathering of Natives, helping to set the stage for the first Alaska Federation of Natives convention.

"Perhaps more than anyone else, he (Rock) helped weld together the frontier state's 55,000 Natives for their successful years-long fight to win the largest aboriginal land claims settlement in American history," wrote Stan Patty of the Seattle Times. He added that Rock was their voice; at times about the only calm voice when crescendos of dissent threatened to tear Alaska apart after the discovery of oil on the North Slope.

Thanks in part to Rock's activism, the fledgling AFN began demanding land and money from the federal government to settle the land claims issue. When the Alaska Native Claims Settlement Act was signed into law in 1971, Rock hailed its passage as "the beginning of a great era for the Native people of Alaska."

In 1975, Rock's leadership was recognized with Alaska's Man of the Year award, which he shared with U.S. Sen. Ted Stevens. That same year, the newspaper was nominated for a Pulitzer Prize for meritorious public service.

"I've never seen anybody die the way Howard died – he went in a blaze of glory," Richards said. "His eyes had a burning light."

A granite headstone and the rib of a giant bowhead, which typically pay tribute to a mighty hunter, mark his final resting place in the Tikigaq tundra about a mile from Point Hope. But Rock's legacy – that of Native unity and activism – lives on.