Or visit online for exhibits and lectures 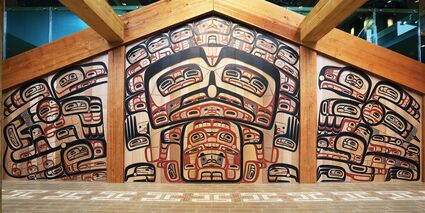 Sealaska Heritage Institute museum in Juneau features an enormous house front made by Tsimshian master artist David A. Boxley. It is thought to be the largest carved-and-painted Tsimshian house front in the world.

Alaska has museums from Dutch Harbor, to Sitka, to tiny Anaktuvuk Pass in the middle of the Brooks Range.

But the most striking-looking building in all of Juneau, and surely anywhere else in the state, has to be the Sealaska Heritage Institute on Front Street.

The huge 40-foot exterior panels outside the building were designed by internationally celebrated Haida artist Robert Davidson, and its design represents a supernatural being called the "Greatest Echo," a theme chosen by Davidson because Dr. Walter Soboleff, the building's namesake, echoed the past to bring it to the present, according to the institute's website.

It draws your eye, but there's more treasures to see right on the street.

Boxley's post depicts Raven, the legendary hero of ancient Tsimshian stories. Above Raven are four human figures who represent Tsimshian clans or phratries: Gisbutwada, Ganhada, Laxsgiik and Laxgibuu. Jackson's post depicts the woman who gave birth to Raven, and examines the complexity of the ways in which Tlingit culture places value on feminine strength. Young's post depicts the story of Wasgo (Seawolf), a supernatural figure in Haida culture that shares traits of both Wolf and Killerwhale, known for possessing the size and strength to hunt whales.

Once entering the museum, you see an enormous house front made by Tsimshian master artist David A. Boxley. At almost 40 feet wide by 15 feet high, it is thought to be the largest carved-and-painted Tsimshian house front in the world. The center of the house front tells the Tsimshian story Am'ala: Wil Mangaa da Ha'lidzogat (Am'ala: He Who Holds up the Earth). A tiny door in the belly of Am'ala leads into the clan house, formally named Shuká Hít (Ancestors' House).

Exhibits include "Our Grandparents' Names on the Land," which explores ancient place names and the innovative inventions used to catch halibut and salmon. It includes sections: "Native Voices on the Land"; "Salmon People"; and "Halibut, Attack the Hook!" And "War and Peace" that delves into traditional Tlingit laws, the consequences for breaking them, and the complex peace ceremonies that ended conflicts and restored balance.

If you can't visit, the website also offers videos of lectures such as "The Sitka Tlingit and the Pacific Northwest Gun Frontier," by Dr. David Silverman

Entrance fee for an Alaska resident adult is $14.

Established in 2004, the mission of the Alaska Jewish Museum in Anchorage is to provide a home for Jewish history, art and culture in Alaska.

It tells the stories of Alaska's Jewish residents and their contributions to the development of the state's industries, government and culture from territorial days to the present.

And it's also a gathering place and archive to build cultural bridges to promote diversity and tolerance for all Alaskans. The museum's programming demonstrates connections between the past and the present.

A visit is a great way to expand your understanding of a people and culture that often is misunderstood.

It's in downtown Anchorage at 1221 East 35th Avenue and the entrance fee is $7 for seniors. Or take a 3D tour at https://www.alaskajewishmuseum.com/visit/

Opened in 2021, the Little Lithuanian Museum and Library, at 18042 Amonson Road in Chugiak, celebrates Lithuania's history, culture and heritage. In the Middle Ages, Lithuania was the largest principality (who knew!) in Europe, known as the Grand Duchy of Lithuania, extending from the Baltic Sea to the Black Sea and to within 100 miles of Moscow. Lithuanians were the last Pagans to be converted to Christianity in Europe, and to this day Lithuania is a fascinating blend of Paganism and Christianity.

A member of the European Union, Lithuania joins the world community with achievements in technologies, the arts, music and sports, while continuing to honor, perform and teach traditional arts such as weaving, woodcarving, blacksmithing and folk dance and song.

Alaska veterans get a museum of their own

In a new location, Alaska military veterans have a place where exhibits reveal the role of Alaska volunteers in all U.S. conflicts.

But you can also tell your story in the oral history project where Alaska veterans share their stories.

The museum urges veterans to contribute their stories and not dismiss their experience by saying, "But I didn't do anything special" or "My service was boring, I saw no combat."

Alaska is the state with the most veterans in the country, so there are many voices to hear from. Request an oral history package by emailing contact@alaskaveterans.org. The staff will help you complete the paperwork, copy your photos and documents and records. Go to https://alaskaveterans.org for more information. It's a mere $3 for admission. 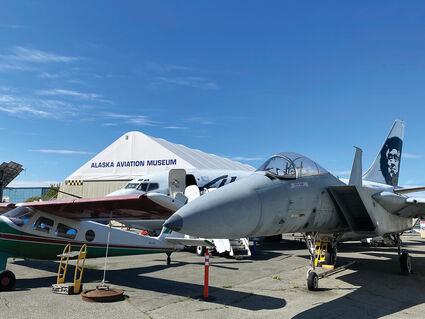 New and old, large and small, the Alaska Aviation Museum in Anchorage has all kinds of aircraft and more.

Surely Alaska has seen a long history of flying machines over the decades. At Anchorage's Alaska Aviation Museum, visitors can gawk at the various planes that served Alaska through the decades, and maybe bring back some personal memories of flights taken and survived.

From the 1943 Grumman G-44 "Super Widgeon," that used to make the run to Akutan and Nikolski on the Aleutian Chain, as well as other villages, to my favorite, the 1965 DeHavilland Beaver, the museum has all the Bush planes.

Located on the south end of Lake Hood, the busiest floatplane with more than 87,000 takeoffs and landings a year, aside from looking at vintage planes you can watch actual ones take off from the lake and nearby Ted Stevens International Airport.

Senior and veteran admission is $14. Visit https://alaskaairmuseum.org/ for information.