When self-sufficiency and chickens collide 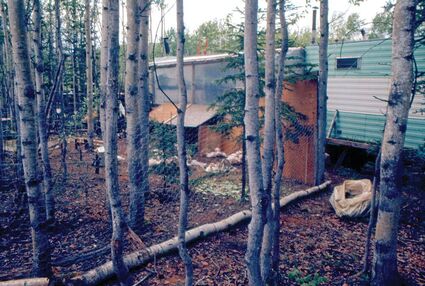 Young chicks in their pen behind the McMichaels' Fairbanks home, 1975.

Living at our place on Chena Hot Springs Road out of Fairbanks the spring of 1975, my husband Gary and I wanted to be as self-sufficient as possible. We had five acres, but no electric power. Besides tending our garden, greenhouse and two honeybee hives, we decided to raise our own meat. So, we purchased thirty Cornish Cross chicks and two Holstein calves.

Of course, these cute little peeps soon outgrew their cardboard box. We built a small plywood shelter and created a fenced enclosure with chicken wire attached to the aspen trees off the backside of our trailer home.

After several weeks, one Saturday morning we decided it was time to quit feeding them and put them in the freezer. Gary chopped off 10 heads and we dunked the fowl in boiling water, ran them through his homemade de-feathering contraption, cleaned, washed, cut up and wrapped our healthy organic chicken meat. Then we drove the packages to neighbors about two miles away where our freezer was plugged into their electricity. The next day we did the same thing. I did everything except cut off heads.

Monday morning when Gary left for work, he said, "It sure would be great if you could get another five done today." I assured him I could. After all, the only thing I hadn't done was to chop heads off and I had carefully watched him do it. So shortly after he left, I got things set up and went out and caught my first unsuspecting chicken.

I carefully laid the chicken on its back on the block of wood, holding on to its feet with my left hand. After running two fingers back and forth near its eyes to hypnotize and calm it down, I let go of its feet. I switched to my left hand to do the hypnotizing action, leaving my right hand free to pick up the hatchet. I didn't want my fingers anywhere near the neck when I brought the hatchet down. Already the process had taken at least twice as long as when Gary did it. I had another problem – I was starting to feel sorry for the chicken.

I saw that the chicken was losing its relaxed feeling, so I decided it was now or never. For some reason, just as I brought the hatchet down, I looked away. Bad idea. My aim was off a little and I didn't hit nearly as hard as Gary did. Then I really had a mess. The injured, not dead, chicken flopped around spraying blood everywhere. Full of adrenaline, I tried to decide what to do.

The bird was not going to hold still for another try with the hatchet. I had heard of people wringing the neck of a chicken to kill it, but had never seen it done. Deciding I didn't have much choice, I grabbed the chicken and tried to wring its neck like a towel. It only took a few seconds to see that it wouldn't work. Somehow I ended up just hanging on to the neck and twirling the whole bird around like a jump rope. After a short while I realized the poor thing was dead. I walked away from the scene to calm down and think. So far things were not going well. Gary had made it look so easy.

One dead chicken and four more to go and my nerves were a wreck. I could take care of this one chicken, but that wasn't very good use of the day. Besides, what would Gary think when he got home. If I hadn't already killed one, I could just forget the whole thing. I knew other women had killed chickens. If they could, I could, too. I didn't think I could wring any more necks, though. The chickens were so big and heavy. Back to the hatchet. Only this time, I would look when I swung and swing hard. I hardened my heart and proceeded without any further problems.

When Gary arrived home from work, I was just finishing up with the packaging. I told him about my experience. He didn't seem to understand why I had such a problem. In fact, since there were only five chickens left, he asked, "Would you do them tomorrow?"

"Only if you chop all their heads off before you leave for work," I replied.

In the years since, whenever we have raised chickens, I participated in all aspects except one.