Loneliness and hardship for early trappers 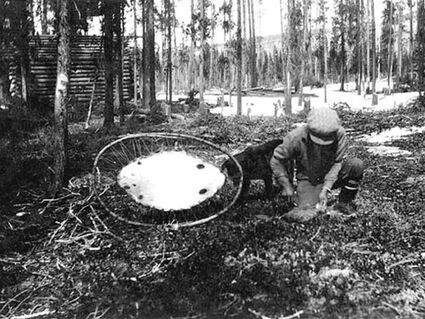 Once trappers skinned and scraped the skins of beavers they trapped, they then stretched the hides on circular frames like the one in this photograph.

Some adventurous souls who came to Alaska didn't search the creek beds and mountains for golden riches. Instead they chose to make their fortunes through trapping furs. From early in the fall to the close of trapping season in April, many trappers traveled miles and miles of trap lines with no company but that of their dogs. It was no job for a "Chechako."

Trappers like Ed Ueeck covered around 80 miles a week, checking to see if any animals had been caught in hidden traps.

"About 14 miles a day is my average travel on the circle, although I cover considerably more than that, of course, on the side trails," Ueeck told Tom Jackson in an article for the October 1939 issue of The Alaska Sportsman. "During the trapping season there are only six hours of daylight at the most, and it is long after dark before I reach the trail cabin at the end of a day's hike complete."

Once trappers fixed something to eat and fed their dogs, they then had to skin and care for the furs they'd picked up along the line and get ready for the next day.

"Blinding storms are sometimes encountered far out on the trail between shelter cabins, and a biting wind with the thermometer at forty below zero makes it seem twice that cold," Ueeck said. "When a trap has been sprung, it has to be reset with bare hands, and it must be done quickly and carefully...frozen hands can easily spell disaster to a trapper who is a hundred miles from civilization."

Ueeck started out in the Matanuska Valley helping colonists harvest their crops. But when he saw the prices paid for furs, he switched professions and headed into the wilderness. He chose a spot near Lake Leila, on the divide between the Nelchina and Matanuska rivers.

After unloading six months of supplies from a pontoon aircraft, he picked up an axe and began swamping a trail through a heavy growth of willows to build his headquarters cabin on higher ground.

Once that cabin was finished, he spent a few years building another six cabins on the circumference of a circle, whose center was the main cabin. He stored his winter supplies in a cache, about 18 feet above ground, to prevent wild critters from helping themselves to his grub.

Ueeck's story is similar to hundreds of early trappers who turned to the Last Frontier to eek out livings in the wilderness, including this author's grandfather. Robert Louis Mathison and his brother, Charlie, worked on their Hope gold mine during summers and trapped during winters. They sold their furs to David Green after the master furrier started his business in Anchorage in 1922.

Most trappers didn't talk much about the money they made, nor the hardships they endured climbing creeks and mountain ridges as they routed out any unlucky fur bearers that happened to cross their paths. But they knew that any man who could make a living from trapping in Alaska could make a success of anything.