Flying legal: Your cannabis and the law 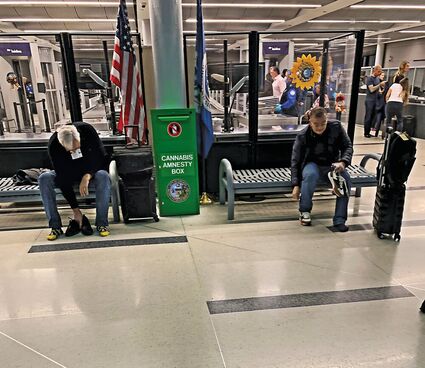 A disposal box at Chicago's O'Hare International Airport, for passengers who don't want to risk flying with marijuana.

Twenty-one states have decriminalized possession of cannabis and some allow growing for your own use. Pot shops have popped up all over and the taxes from the sale of marijuana in specialized stores have bolstered many a municipal budget.

In Congress, Senate Majority Leader Chuck Schumer introduced the Cannabis Administration and Opportunity Act, which would federally decriminalize weed. However, the bill's passage is uncertain.

As a THC user, how do you get from Alaska to another state carrying your marijuana or edibles? And should you?

In relaxing punishment on marijuana, President Joe Biden said he would issue pardons to everyone convicted of the federal crime of simple marijuana possession. This will apply to about 6,500 Americans. However, a senior White House official clarified to reporters that no one is currently behind bars for simple possession of marijuana.

But if you don't want to end up in a Russian penal colony for nine years like American WNBA basketball star Brtittany Griner, never bring even CBD into a foreign country. If you really want to go to Europe, go to Amsterdam where they have it in cafes.

Sneak it in or not

While carrying marijuana in a civilian aircraft is illegal under federal regulations, in some airports, like Sea-Tac, people are not prevented from bringing it aboard in their carry-on or checked luggage.

Hence there are amnesty drop boxes in airports for those who decide that maybe it's too big a risk to carry onto the plane, or they are traveling to a state where it is still illegal.

With a medical marijuana card in hand, the authorities are much more lenient. There have been no reports so far of people being arrested for possession when holding a medical card.

Some airports do have fines, like Colorado Springs, Colorado, where it is $2,500 and jail time, and Denver, $999, but no jail time.

You can bring on a CBD product so long as it contains no more than 0.3 percent THC, which does not cause a high, or is approved by the Food and Drug Administration. If the product is a liquid it must, like any carry-on liquid, be 3.4 ounces or less.

According to the US Transportation Security Administration website, "TSA's screening procedures are focused on security and are designed to detect potential threats to aviation and passengers. Accordingly, TSA security officers do not search for marijuana or other illegal drugs, but if any illegal substance is discovered during security screening, TSA will refer the matter to a law enforcement officer."

In conclusion, be aware of the laws at the airport before you go and either comply or not, but be ready for whatever may happen.