By Jim Lavrakas
For Senior Voice 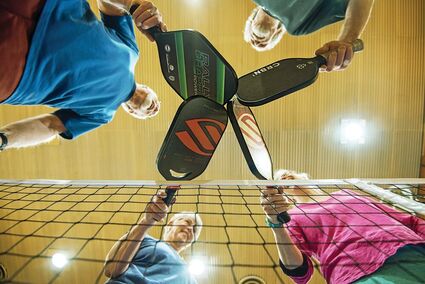 Tapping paddles after playing a game is the traditional method of concluding a game and a chance to show good sportsmanship.

If you're new to pickleball, or just need a refresher course on how to behave (you know who you are), here are well-accepted rules for behavior before, during and after play. These basic rules were taken from http://www.woodbridgepickleballclub.org, and I've embellished them.

1. Begin each game by acknowledging the other players and introducing yourself if you don't know them.

This is what helps makes pickleball the great "social" game that it is. By making an effort to introduce yourself you're letting new players know they are welcome and you create a lightness before you play that promotes fun.

2. If the ball is out and it's on your side, call it out. Never make calls for your opponent's side of the court.

This is where that "lightness" I just mentioned can go sideways. Making line calls can be difficult when the game is fast-moving. When a ball is hit close to the line it is a judgement call on your part. The rule is, if the bottom of the ball hits any part of the line, it's in. If not, it's out. But we can't really see the bottom of the ball, so it's a guess sometimes. In recreational play (where we don't play for money), it's best to be generous and if the ball is close, call it in. Your opponents will appreciate the call and (hopefully) be generous as well.

And your partner can overrule you. If it is close, I will always ask my partner if they agree with my call, and if they don't or are unsure, then the point goes to the opponents.

3. Never ask for nor accept line calls from spectators.

If I hear a call from the sidelines, I will call out: "No talk from the Peanut Gallery!" Sideline calls are not acceptable because those folks are not playing in the game.

4. Play with all skill levels.

Another reason pickleball is considered a social game: it is available and accepting of all levels of players. Players don't get better if they just play with others who are at their level. I only got better once I played with better players. They warned me that they would not be gentle or play "down" to me, but that is what I wanted.

5. If you want a more competitive game, wait your turn with other players you want to play with to get the higher competition you desire.

That may mean sitting out two or three games for a court to open up for you. Do not purposefully make other players feel bad because you want to play with someone else.

This doesn't mean you can't hit to the weaker player, but if you only hit to them, then the game can get pretty boring for the other opponent, right? Are you playing to win or for enjoyment?

7. If you are the strongest player of the four, play the weakest players in a way they can handle and learn from you.

This is about kindness and restraint. Yes, new players need to play more competitive players, but if they can never return a shot, then they will become frustrated.

More from the Department of Kindness and Restraint. It is mean and thoughtless to lob on an 80-year-old player who can't run down the ball. Or hit the ball purposefully at a player who does not have the quickness of hands to block the shot.

Use this opportunity instead to work on making shots that rely on your control of the paddle, shot placement and slowing down the game.

9. At the end of each game, meet at the net, clink paddles and say "good game." Never leave a game without acknowledging the other team.

This is a hallmark of pickleball: the traditional paddle tap. But it's a light tap, not a bash of paddles. Some paddles are pricey and their owners will recoil from a hard tap because of possible damage to their prized gear.

I believe a "good game" is one that is competitive or displayed good sportsmanship. That means (if playing to 11), that the losing team made a minimum of 7 points. If my team didn't get that far then I'll say something like "that was fun", or "boy, you trounced us!". If it was very close, I'll say "that was scary!", or simply "very close, good job". You can compliment your opponents now, or recall a particularly good point.

Unless you want to be a jerk.

Unless you want to be a jerk.

12. Abusive language is not allowed. Verbal comments of any detrimental nature during a game is unacceptable.

If I mumble bad words to myself, does this count?

13. Compliment people on outstanding shots or on a really great game.

14. If you bring a guest to open play that doesn't know how to play pickleball, remember you are their teacher and stay with them until they are comfortable.

If you bring a friend along and they are new to the game, then you are their coach until they are ready to fly on their own. If you bring someone who knows how to play, you should introduce them around and play with them for at least the first few games. Then turn them loose.

15. Call the score out – loudly and clearly – before you serve.

You'd think with older people playing this game it would be understood that some of us have difficulty hearing the score in a noisy environment. I know I do. Try to speak the score in a voice that others can hear.

16. Remember: Pickleball is only a game. 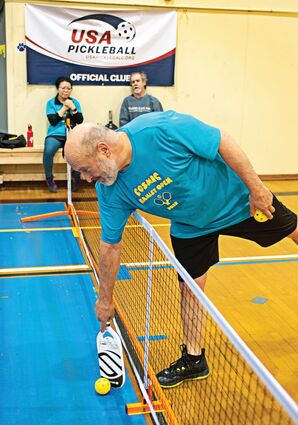 Ian Reid taps a ball back to the server during play at Homer's local recreation facility.

Finally, my pet peeve: Not picking the ball up after play is over and getting it to the server. Make an effort to retrieve the dead ball and get it back to the person serving without their having to chase it down. It's a show of respect when you do this.

I have an ulterior motive for getting the ball back-it helps me stay in the moment, and it helps me control the tempo of the serve, both from my opponent, but especially when my side is serving.

In summary, it's all about having fun while being competitive with a slice of good sportsmanship for dessert.

Next column: Picking a paddle.

Jim Lavrakas has lived in Alaska for almost a half century. The self-proclaimed "squirrel man" has found a lively outlet in the pursuit of pickleball. You can reach him at http://www.FarNorthPress.com.