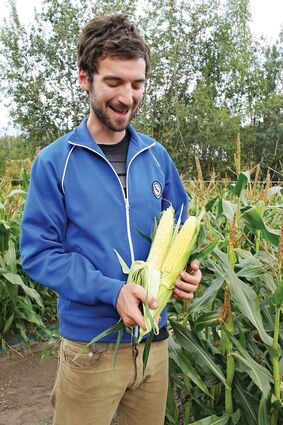 Cameron was raised to be self-sufficient. Growing up meant sharing time between the family's home in Wasilla and their cabin off the grid up the Susitna River. The family planted garden plots in both locations to maximize what they could grow, and there was plenty of work for the family of four to share.

Cameron's father taught him to make things work whether or not all the right tools or parts were available. His mother helped develop his love of nature and getting his hands in the dirt. His parents nurtured the ability to be self-reliant. They made a lean-to greenhouse from whatever could be found, and it served its purpose. The way Cameron views it, he probably would not be as connected to nature or appreciative of running water and electricity without these experiences.

This nature kid next spent time at Fort Lewis College in Colorado, and he found biology and anthropology to be the most interesting. He was exposed to and influenced by ethnobotany, learning how people used local plants as food and medicine. This experience in Ute culture brought life and deep understanding that was previously unknown to him.

His education continued after college, spending time in Montreal, Boston and New York. While in New York with a friend, an AmeriCorps worker establishing a CSA (Community Supported Agriculture) in Brooklyn, he learned about food deserts. These are densely populated locations with no access to full-service grocery stores. The people living in Brooklyn were in a food desert, where purchased food came from small corner markets or gas stations. Fresh produce was lacking, and when it was available, it was expensive. Cameron had a new appreciation for his bountiful upbringing.

Cameron returned to Fairbanks, where he worked at the UAF Agricultural and Forestry Experimental Station in field production and taught at the School of Natural Resources. His interest in hydroponics blossomed when a faculty professor began experimenting with LED grow lights. Could growing food in the dark and cold of Alaska be possible year-round? Yes, it is!

VH Hydroponics believes an improved food system can be created by adding food production hydroponic farming to traditional soil and livestock farming, classrooms, urban backyards and rural Alaska. This efficient method of growing food uses 95% less water and zero pesticides, while allowing Alaskans to grow nutritious leafy greens year-round, and decrease the dependence on old food grown and shipped more than 3,000 miles with over 40% waste and limited food value, aroma or flavor. Fuel costs are increasing, we all felt the supply chain instability during the pandemic, and natural disasters pose unknown impacts; growing our farmers and producing food in Alaska makes sense.

Cameron has dedicated himself for the last seven years to building a team to create an essential legacy. VH Hydroponics wants to leave a legacy with us, to our future, by providing our Sunny Pro XL hydroponics systems to all pre-K and elementary schools in the state of Alaska. Join us in giving the gift of growing to grow Alaska's children, grow Alaska's farmers, and grow our future leaders.