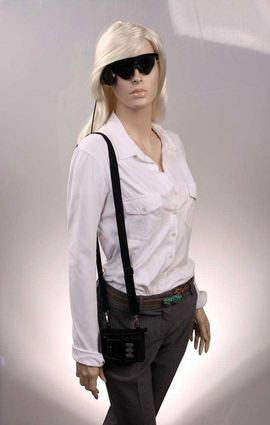 A mannequin models the external components of the Argus II System, a ‘bionic eye’ for people with retinitis pigmentosa.

After more than two decades of field work, the first bionic eye for the blind is finally available. It is call the Argus II Retinal Prosthesis System (“Argus II”) and is used to treat patients with late stage retinitis pigmentosa (RP). The system involves implanting a small electronic device in and around the eye. It also uses a tiny video camera attached to a pair of glasses and a video processing unit that is worn or carried by the person.

The Argus II was just recently approved by the U.S. Food and Drug Administration (FDA) and initially will be available in 12 large cities around the country. No word yet on when it will be available in any Alaska cities. RP is a rare inherited, degenerative eye disease that often results in profound vision loss to the level of bare light perception or no light perception. It affects nearly 100,000 Americans.

The Argus II works by converting video images captured by a miniature camera, housed in the patient’s glasses, into a series of small electrical pulses that are transmitted wirelessly to an array of electrodes on the surface of the retina. These pulses are intended to stimulate the retina’s remaining cells resulting in the corresponding perception of patterns of light in the brain. Patients then learn to interpret these visual patterns thereby regaining some visual function.

“The system offers a profound benefit for people who are blind from RP and who currently have no therapy available to them,” said Dr. Suber Huang, who participated in the clinical trials of the system and is with University Hospitals Eye Institute, Cleveland, Ohio. “Argus II allows patients to reclaim their independence and improve their lives.”

Artificial pancreas may help diabetics in a new way

In a new study just published in the New England Journal of Medicine, researchers showed that this system could successfully reduce the duration and incidence of nighttime hypoglycemia. The researchers conducted a study with 247 patients and found that the artificial pancreas could reduce the incidence of nighttime hypoglycemia events by 32 percent and the duration and severity of those incidents by 38 percent.

With this system, insulin delivery is shut off for two hours once glucose levels reach a predefined threshold. The device is currently undergoing review by the U.S. Food and Drug Administration.

Hypoglycemia is of great concern because it can lead to unconsciousness, seizures and even death. Overnight hypoglycemia is a concern for most patients and family members of those with type-1 diabetes.

“Our work is the first large randomized controlled trial testing the threshold suspend feature,” said Dr. Rich Bergenstal, who is the Executive Director of the International Diabetes Center at Park Nicollet, St. Louis Park, Minnesota. “This technology promises to be valuable to patients today and is a key step in the development of a fully automated artificial pancreas for people with diabetes.”

A blood test to detect colon cancer before it develops

A new blood test may soon be able to detect cancer-related microRNA in the blood before a tumor even develops in the colon. Researchers at the Gastrointestinal Cancer Research Lab at Baylor Research Institute in Texas are reporting that they have come up with a simple blood-based test that examines the levels of a single microRNA.

“This blood-based test could be transformative in how we screen patients for colorectal cancer. It would save lives and could result in major savings of health care dollars,” said Dr. Michael Ramsay, who is president of Baylor Research Institute.

For now you still need to go for your routine colonoscopy screening. Dr. Ramsey said more testing needs to be done before this new blood-based test is ready for commercial use.

John Schieszer is an award-winning national journalist and radio broadcaster of The Medical Minute. He can be reached at medicalminutes@gmail.com.