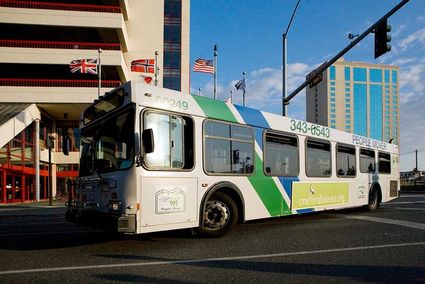 A People Mover bus pulls into the main transit station in downtown Anchorage. New fares go into effect Jan. 1, including an increase for senior riders. The good news is that there will be no reductions in routes and a couple of routes will have buses more often.

Anchorage seniors ride the People Mover buses at half the cost of others on board. But all fares have been raised effective New Year's Day. The fare schedule has also been simplified so that regardless of whether one buys a pass or pays for each trip individually, the reduced fare is half the full fare.

Seniors and others who qualify need to have one dollar in exact change, instead of 50 cents, when they board for one trip. They also need to show proof of eligibility which includes a picture ID each time they board.

Seniors 60 and older; youths age 5 to 18, and individuals with Medicare cards are eligible for the half-price ride. A Medicare card will substitute for a picture ID.

According to the People Mover website, veterans and people with qualifying disabilities must complete the Half Fare application process.

Riders can choose to buy an ID card at the Downtown Transit Center. Internet access to http://www.peoplemover.org offers a wealth of information about the public transportation system. There is also a print guidebook, which shows routes and provides other information, but it is the August issue, so while it's still valid for routes and handy tips, the new fare schedule is not in it.

Asking for information by making a phone call is also an option at the Rideline, 343-6543. Rideline operators are available Monday through Friday during the usual daytime business hours. The number is easy to find, it's prominently displayed on the buses themselves.

The good news is that there will be no reductions in routes and a couple of routes will have buses more often. The People Mover system also includes AnchorRIDES and Share-A-Ride.

Supporters of public transportation are quick to note that the ability to take the bus is critical for those who need rides if they are going to be able to go to work or get to the grocery store or to a medical appointment.

Of course some riders are on the bus because they find it better than coping with a car and finding parking, as well as reducing traffic congestion and the pollution caused by Anchorage's many private vehicles.

At present the main bus depot is downtown. Mayor Sullivan wants the city to buy a piece of federal property in midtown near Lowe's and Home Depot at 40th Avenue and Denali street to build a new transit center. If that effort is successful, the city will also need construction money and the hub of the system would look more like a wheel with routes as spokes and the hub in the middle.